CASTRIES, St. Lucia – St. Lucia is celebrating its 43rd anniversary of political independence from Britain on Tuesday, with Prime Minister Phillip J’. Pierre calling for greater unity among the population as the island moves towards facing the socio-economic challenges confronting it. 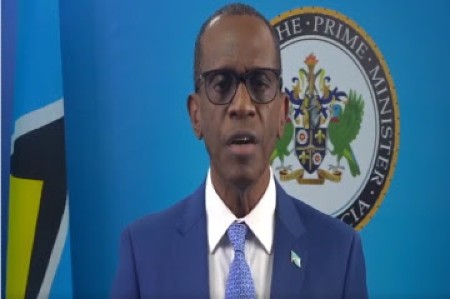 “If we spend enough time making war against one another on the basis of party differences we will ultimately destroy the future of our children,” Pierre said insisting that his administration will not encourage strife and division within “our Saint Lucian family,” since there can be no winners – only losers in such battles.

“Elections can be both good and bad -good when the process is used in the common interest. But when elections are seen only as opportunities to benefit from selfish behavior regardless of which side wins, we all lose. A half successful Saint Lucia is a totally unsuccessful St. Lucia.

“We must heal the root causes of our pain, whatever they may be. We must render ourselves physically and mentally fit soldiers in our war against poverty, against discrimination, against poor education, unemployment and crime.

““Let us invite our brothers and sisters everywhere, regardless of political affiliation to enlist in our fight against our common enemies – enemies that do not recognize party colors,” Pierre told the nation, adding that St. Lucians should strive to make every day a good day.

“Let us never go to sleep without asking ourselves ‘What did I do for my country today that will benefit us all tomorrow?’”

“If each of us would pledge right now to be the best citizen we can be regardless of political stripe, we would immediately see a positive change in the number of road accidents, less pollution – we will see a reduction in the negative impact of COVID.

” We would in consequence, put less stress on the public purse, our health facilities and those who work so hard to deliver the best possible service. In short, what I am advocating is that we turn a new leaf and start doing more for our country by doing better for ourselves,” Pierre said, describing as   unacceptable the increase in criminal activity, mainly gun-related homicides, that have caused unnecessary pain and suffering.

“We must end that menace. We must build respect and care for each other. To do so, we must have a sense of self and a sense of identity, celebrating each human life, acknowledging the worth of every human being,” Pierre said, citing the need for strong public education and more equity in the distribution of wealth.

But he told the nation that his administration would ensure that the laws of the country are observed.

“The police will be expected to do their duty in causing a reduction in crime,” Pierre said, promising that his administration will prioritize spending on law and order.

“During the past forty-three years, St. Lucia has been steadfast and committed to its pursuit of development of the country and people.  St. Lucia’s global contribution is widely recognized and exemplified by its two Nobel Laureates, and these feats are aptly reflected through the theme chosen to commemorate this Anniversary, “Douvan Ansanm – Celebrating our People,” Barnett said in a congratulatory message to Prime Minister Pierre.

“CARICOM is pleased to join with the government and people of St. Lucia in celebrating this anniversary, and extends best wishes for the continued progress of St. Lucia,” she added.