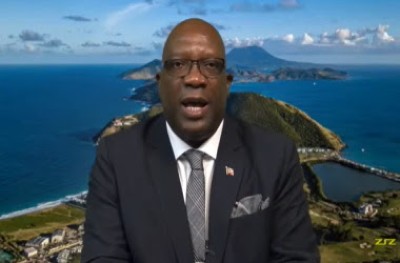 Prime Minister Dr. Timothy Harris addressing the nation on Thursday (CMC Photo)In his letter to the legislators that included Deputy Prime Minister Shawn Richards and the Nevis Premier Mark Brantley, the Governor General wrote acknowledging receipt “of a communication addressed to me” which “bears no date.

“I note the request contained therein. Consistent with my duty to seek formal legal advice, I wish to advise that I will do so and revert to you at the earliest,” said the two-paragraph letter.

Prime Minister Harris in a broadcast in which he spoke almost entirely about the late former Nevis premier, Vance Amory, who will be buried on Saturday, said nonetheless that citizens are aware of “certain misgivings in the public domain with respect to the issues raised by the Team Unity partners.

“I wish to assure you, as your Prime Minister that the country remains stable and every effort will be made to maintain the peace and tranquility of our beloved Federation.

“I have taken steps as Prime Minister to answer the several issues raised by my partners in the Team Unity coalition. I have responded to those issues in writing. I intend to respect the period of mourning. I call on all political actors and parties to exercise restraint and demonstrate good judgment and respect during this period,” said Harris, who led the coalition to its first victory in 2015.

Last week, Prime Minister Harris, who was re-appointed head of the government following the 2020 general election, was given an April 20 deadline to resolve the issues facing the coalition government or dissolve Parliament and pave the way for fresh general elections as the rift within the administration widened.

Harris had said last week that the issues confronting the government related to governance and transparency, a reassignment of ministerial duties, the external involvement of global financial institutions, and an increase in the operating budget of Nevis.

Brantley, speaking on a radio program here on Thursday, said that the seven legislators had written to the Governor General indicating that “Dr. Timothy Harris does not command the support of the majority of elected members in the National Assembly.

“It is a matter for the GG (Governor General), his Excellency to act. We believe based on legal advice that we have taken that he does in fact have the authority to act and therefore we have invited him to do so,” said Brantley.

“And so at this defining moment in our history, I am also here to declare to the wider nation that I am also ready to lead. You can count on me to keep my word; to be faithful and to be a genuine team player.

“Today we have all faced the truth together. And so, we beg for the support of people of good conscience and all political persuasion; and for the people who have faith in our democracy.”

Richards said he understood that “at this hour high level discussions are taking place at many levels, and that the relevant legal advice is being sought.

“We also understand that the representative for constituency #7 (Prime Minister Harris) may be seeking to make other arrangements, or to even trigger a fresh national election.

“We will subscribe ourselves to the rule of law and to the constitution; and we will leave our fate in the hands of the people. Whether it’s now, or in 21 days, we once again state that we are united, willing, and ready to lead – and that we are determined to keep the promise,” Richards added.

He said the concept of unity was “an idea and a movement that brought us to new heights in the last years, and that has helped us to successfully navigate the challenges brought on by the pandemic”.

He said while he stood as “a key promoter of unity, understanding that as a small nation we will forever be stronger united together, the concept of unity is based on mutual respect, trust, honesty and fairness.

“The concept of unity shall only thrive by its very nature, on inclusion and by, at every turn keeping the promise – and keeping our word to each other,” Richards said, adding that for the last five years, almost every member of the Team Unity government has lived by those broad principles and have kept their promise “even when at times sticking to the principles for which we signed on to had put us at a disadvantage”.

But he said that it was always clear that for the concept of unity to thrive, there must be an unbreakable respect among partners.

“Unfortunately, in recent months that respect has broken down; and accords signed disregarded. The very concept of the unity on which we promised to govern, has in some instances been systematically and deliberately undermined,” the Deputy Prime Minister said, adding “people won’t expect us to keep our manifesto promises if they can’t count on us to keep our word”.

Richards said that it is within this context that the government legislators had informed the Governor General Sir Tapley Seaton “that we have decided to choose a trusting solid unity, rather than coercion and confusion.

“We chose trust over suspicion, clarity over ambiguity and respect over disregard. Indeed, we chose to be the conscience of this nation.

“Because Prime Minister Timothy Harris has consistently in recent times failed to live by these high ideals; failed to engage his team members and has gone back on his words and his agreements, we felt that these actions, if not stopped, will completely derail the train of unity.”

Richards said that the challenge of leadership may have caused “our good friend, and my leader for the last six years, to have faltered. And as friends will do in tough moments, we are prepared to help him in any way possible to deal with this flaw.

“It must be clear that we must not be about personal attacks, for in the end we are still essentially, one family. But this family is hurting, and we must do everything in good conscience to help this family revive.

“And so, we have decided to move forward together, understanding that one member of the team is no longer willing to subscribe to the accords to which we all signed”

Richards said that of the legislators who wrote to the Governor-General, Eugene Hamilton, who is overseas on medical attention “has been an integral part of discussions in the last few weeks on the status of the relations — and has contributed significantly to those debates and discussions.

“We expect his open declaration of solidarity with the action when he returns; but we feel that his must urgent attention must be paid to his health as a matter of urgency.”

He said the government legislators who have now expressed non-support for Prime Minister Harris, would most likely be joined by “our other colleagues” and “are now willing to offer ourselves up to the nation as the keepers of the flame of unity; as men and women who will be guided by principle rather than personal aggrandizement.

“While this may seem on the face of it as a difficult period; we view this as a period of opportunity to reset priorities; to restate principles and to protect this value of unity.”