BASSETERRE, St. Kitts – St. Kitts-Nevis National hero, Sir Kennedy Simmonds has called for the removal of Prime Minister Dr. Timothy Harris from office, saying that he is not good for democracy and the twin-island federation. 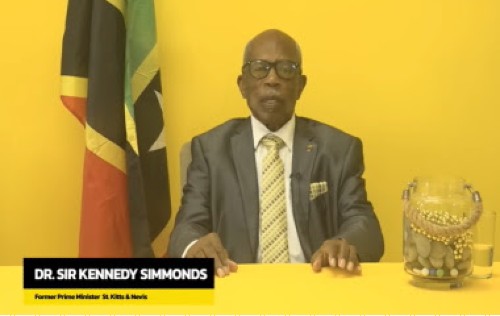 In an unprecedented address to the nation broadcast on the state-owned ZIZ Network, Sir Kennedy, a former prime minister, said Harris, who is among candidates contesting the August 5 general election, must be removed because “he has proven that he cannot be trusted”.

Sir Kennedy, who served as the first St. Kitts-Nevis prime minister in 1983, said that Federation “is sinking into a crisis of morality in the midst of a rampant and self-seeking dictatorship” amidst “a political nightmare of nepotism and greed”.

The former leader of the People’s Action Movement (PAM) reminded the nation that he seldom makes political statements since his retirement in 1995 but that ‘the current state of affairs in my country has forced me to break my tradition and I can no longer remain silent”.

He accused Prime Minister Harris, who is leading his People’s Labour Party (PLP) into the general election of “trying to corrupt the electoral process and steal and buy the elections.

“For the benefit of future generations, this present danger to our democracy, Timothy Harris must be removed with the greatest urgency. All hands must be on board, we have a nation to save,” Sir Kennedy said, adding that Harris has consistently betrayed the trust of allies.

He said Harris had consistently sought to undermine the unity arrangements that resulted in the electoral victory of the coalition Team Unity government in the last two general elections, adding that the other members had no choice but to quit.

Prime Minister Harris was forced to dissolve Parliament on May 10 after PAM and Concerned Citizens Movement (CCM) legislators, who together accounted for seven of the nine seats in the Cabinet had filed a motion of no confidence in the Prime Minister, who scuttled that move by firing the dissidents and indicating that he would announce a date for the polls within the stipulated 90 day period.

The coalition had retained power in the June 2022 election, winning nine of the 11 seats in the 15-member Parliament.

The other two seats went to the main opposition St. Kitts-Nevis Labour Party (SKNLP) while under the Constitution of the twin island Federation, the other four legislators are nominated by the Governor General following the polls.

Last Tuesday, 34 people including representatives from the Nevis Reformation Party (NRP), the Moral Restoration Movement (MRM) as well as two independents were nominated to contest the elections.