BASSETERRE, St. Kitts – Governor-General, Sir Tapley Seaton, has denied a request by six legislators for the removal of Prime Minister Timothy Harris as the split within the ruling coalition Team Unity government takes another turn. 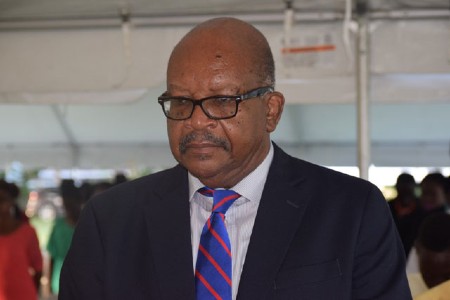 Sir Tapley Seaton (SKNIS Photo)Deputy Prime Minister, Shawn Richards, has indicated that a joint statement would be issued later on Thursday by the six elected representatives of the National Assembly.

In his letter to the legislators, the Governor General said that he had “reviewed your communication requesting the Governor-General to remove the Prime Minister and to appoint another Minister in his stead.

“I wish to advise that under our Constitution no such power resides in the Governor-General and I am therefore unable to accede to your request,” he said in the brief letter.

Last month in an earlier response to the legislators, the Head of State had indicated that he was awaiting “formal advice” on the situation and would “revert to you at the earliest”.

The PLP controls two of the nine seats in the coalition government with the two other seats in the National Assembly belonging to the opposition St. Kitts-Nevis Labour Party (SKNLP) which has already called for fresh general elections to end the crisis in the government.

Last month, the disgruntled members of the coalition announced they had filed a motion of no confidence in Prime Minister Harris.

Harris has himself called on the population to be aware of “certain misgivings in the public domain with respect to the issues raised by the Team Unity partners.

“I wish to assure you, as your Prime Minister that the country remains stable and every effort will be made to maintain the peace and tranquility of our beloved Federation,” he said in a national broadcast last month.

Brantley has maintained that Prime Minister Harris does not have the support of the majority of the members in Cabinet, adding that based on legal advice, the Governor General “does in fact have the authority to act and therefore we have invited him to do so”.

Richards had also indicated that the legislators would follow the “rule of law and the constitution” adding “we will leave our fate in the hands of the people.

When a motion of no confidence is filed, the Speaker of the National Assembly is required to schedule a sitting of parliament within 21 days for the motion to be debated.

Attorney and former government minister Dwyer Astaphan in a commentary on Wednesday, suggested that the six elected representatives should have resigned as ministers of government before submitting a Motion of No Confidence against the government.

“We know that the Speaker of the National Assembly is seeking legal advice as to whether the Motion of No Confidence filed against the government and the Prime Minister on April 25, 2022….is in order.

“I think that if there is a defect in that Motion of No Confidence, it would be related to the fact that when it was filed, the six gentlemen were still members of the cabinet. Maybe they are still members of the cabinet as we speak. I say this because there is a view that it would be at best awkward and at worst unacceptable for cabinet ministers to be signatories to a Motion of No Confidence against an administration of which they are members,” he added.