“Queens also stands in firm solidarity with all our Ukrainian American neighbors who are already in the United States, and we applaud President Biden for quickly extending Temporary Protected Status protections to those individuals,” he told the Caribbean Media Corporation (CMC). 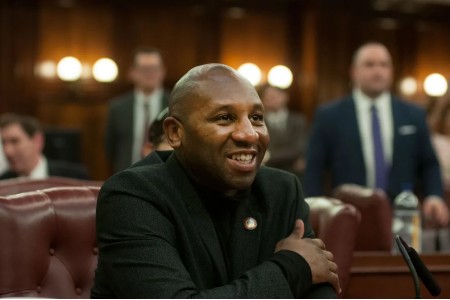 Donovan Richards Jr. (via The City)“There is no more diverse or welcoming place in the world than The World’s Borough, and Queens stands ready to proudly welcome any Ukrainian refugee seeking the safety and security they deserve,” Richards added. “We will stop at no length to ensure families fleeing war are given the support structure they need during this unimaginably difficult crisis.”

On March 3, DHS announced the designation of Ukraine for TPS for 18 months.

“This designation is based on both ongoing armed conflict and extraordinary and temporary conditions in Ukraine that prevent Ukrainian nationals, and those of no nationality who last habitually resided in Ukraine, from returning to Ukraine safely,” said the DHS in a statement.

“These conditions result from the full-scale Russian military invasion into Ukraine, which marks the largest conventional military action in Europe since World War II. This invasion has caused a humanitarian crisis with significant numbers of individuals fleeing and damage to civilian infrastructure that has left many without electricity or water or access to food, basic supplies, shelter, and emergency medical services,” it added.

A country may be designated for TPS when conditions there fall into one or more of the three statutory bases for designation: ongoing armed conflict, environmental disasters, or extraordinary and temporary conditions.