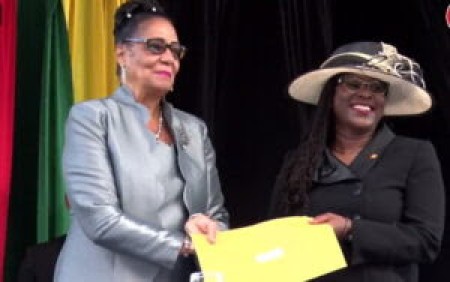 New Grenada Attorney General, Claudette Joseph, receiving her instruments of appointment from Governor General, Dame Cecile La Grenade (CMC Photo)The ministers, including two women, were sworn in by Governor General, Dame Cecile La Grenade, at the Kirani James Athletic Stadium in the capital, before hundreds of supporters. The new cabinet is slightly smaller than the previous one of the former government of Keith Mitchell that had numbered 13.

Mitchell said that the composition of the cabinet is “meant to reflect our campaign promises to the people of Grenada to begin the transformation of Grenada” and that he wanted to assure all citizens “that we will do our outmost to drive the economic development of our people, to put Grenadians first and to ensure that we all hold each other collectively responsible and accountable for the trust, the faith and the confidence that you have shown in each and every one of us.”

Mitchell said that he intends to start the process of transformation in an environment of industrial peace and as a result “the time for productivity is now.

“As leader of the government, I accept we have to extend the olive branch to begin that peace process and therefore I am going to publicly announce as a sign of our commitment to ensuring that peace prevails that in my capacity as Minister of Finance…we will instruct the Ministry of Finance to repay to the teachers of Petite Martinique, Carriacou and Grenada the salaries that were docked unjustly from them and that those payments should be made as early as the end of July 2022.

Mitchell said he has already signalled to the senior public servants the need to put “our house in order” and that the new government will seek to address the “varying discrepancies” with regards to the employment status of public workers.

In his address, Mitchell also announced that his administration would be recalling all diplomats and honorary counsels “to ensure that as we go forward persons who are the privilege of representing Grenada at counsels and foreign missions abroad are first and foremost Grenadians and that they have without doubt not their personal interest but the interest of the people of Petite Martinique, Carriacou and Grenada.

“Should there be and this should be rare, the need to appoint a non-Grenadian we must ensure that that non-Grenadian is truly about representing the interest of the people of Petite Martinique, Carriacou and Grenada,” Prime Minister Mitchell added.

The following is the full list of Cabinet Ministers.

Ron Livingston Redhead- Minister of State in the Ministry of Education, Youth Affairs and Sports

Senator Adrian Augustine Thomas – Minister of State in the Ministry of Agriculture, Fisheries and Cooperatives.