BRIDGETOWN, Barbados – Prime Minister Mia Mottley Monday announced a new cabinet, while offering two seats in the Senate to the opposition parties as she begins a new five-year term in government following her Barbados Labour Party (BLP) whitewash of its adversaries in the January 19 general election. 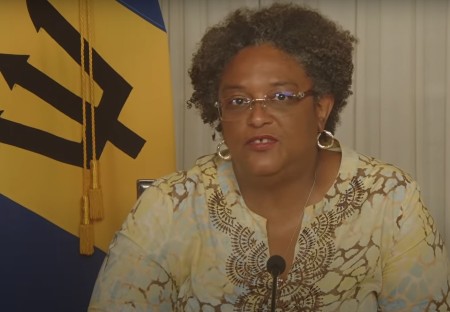 Prime Minister Mia Mottley, announcing the composition of her new Cabinet via livestream. (file photo)In a national address, Mottley also revealed plans to amend the Constitution to allow for the appointment of 18-year-old Khaleel Kothdiwala as the island’s youngest senator. She further named for the first time a deputy prime minister in the person of Santia Bradshaw along with three other senior ministers.

“We face simply too many critical challenges for us to continue with business as usual,” Mottley said in her address, thanking the electorate for giving the BLP an “unprecedented mandate of a second term with all of the seats in the Lower House.

“We are most honored, we are humbled. Most of all we are committed to delivering for all of the people of our country,” she said, noting that the new development agenda titled “Our Barbados, Owning Our Future,” is a transformative one intended to build human and social capital and a sustainable economy in which the skills of all Barbadians will be required.

“The government that I lead is determined that Barbados will be viewed as one of the world’s top countries, a place of energy and enlightenment, opportunity. It is our intention that Barbadians should continue to hold and draw on the finest of our values and traditions as a people”.

Mottley, who called the general election 18 months ahead of the constitutional deadline, saying she needed to bring about unity in the country, said that the campaign has ended and it is now time for Barbadians to unite and move beyond partisan division.

“Now is the time for governance which builds public trust as between government and people. This is the time in which citizens and residents of all ages, classes and persuasion must offer solutions to the problems we are facing as a nation and as a people”

She said while there would be need for “constructive engagement” debates should be “in the cause of advancing our nation not merely to add to the discussions and the noise, nor to sow division”.

The election had been a straight fight between the BLP and the other established political party, the Democratic Labour Party (DLP) that suffered the same whitewash in 2018. But there were other small parties and independent candidates, all of whom failed to have any impression with the electorate.

“It is the intention of this government again to engage with the opposition parties which contested the last two elections to determine how best they may participate in the appointment of two opposition senators provided for in our Constitution.

“I am equally awaiting a legal opinion from the Honorable Attorney General (Dale Marshall) on this matter before we start those formal discussions with the opposition parties,” she said, adding that she will appoint a chief of staff in the Prime Minister’s Office as Barbados moves to deal with a changing global environment.

“Despite the challenges which lay ahead, my friends, this is a moment for optimism and yes a time for opportunity. We must use it to educate, upscale and train a new generation of confident Barbadians for nation building, for regional engagement and for global leadership”.

She said that it would be an era to end the intergenerational cycle of poverty and for the island to take its place in a new global environment and ‘for our voice to be truly matter globally inspite of our small size”.

The following are the names of the new Cabinet of Barbados.