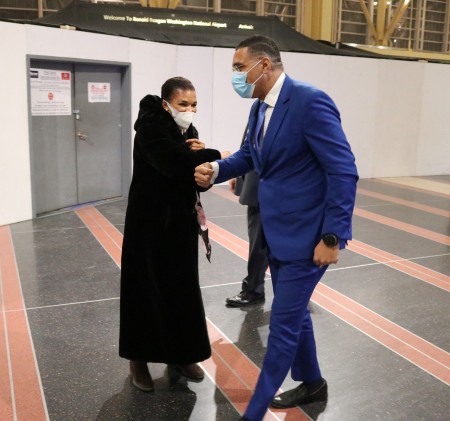 Prime Minister Andrew Holness is greeted by Jamaica’s Ambassador to the United States Audrey Marks as he arrives at the Ronald Reagan International Airport in Washington DC on Tuesday for a five-day working visit. (Photo by Derrick Scott)The prime minister accompanied by the Minister of Foreign Affairs and Foreign Trade, Senator Kamina Johnson Smith and a five-member delegation was met on arrival by Jamaica’s Ambassador to the United States Her Excellency Audrey Marks, the Deputy Chief of Mission at the Embassy Mrs. Nicolette Williams and other embassy officials.

The Prime Minister will commence his visit at the White House on Wednesday March 30th 2022 with a meeting with Vice President Kamala Harris. He will continue with senior officials of the US Administration including Secretary of the United States Treasury, Janet Yellen as well as Secretary of State, Anthony Blinken and the Administrator of the USAID.

The Prime Minister will also have high level congressional meetings with Senate Majority Leader, Charles Schumer. He will also meet with Chairman of the Senate Foreign Relations Committee Senator, Robert Menendez and members of the Committee.

The Chairman of the House Foreign Affairs Committee Chairman, Gregory Meeks will also host a meeting for the Prime Minister with members of the Committee.

He will also address members of the Washington DC Press at the National Press Club.

Prime Minister Holness will join members of the Diaspora as the special guest on the “Lets Connect with Ambassador Marks” online town hall meeting, on Friday at 7pm EDT. He is expected to highlight the island’s development at 60 years of Independence and outline the efforts being made to facilitate expanded diaspora participation in the overall economy.

While in Washington, Prime Minister Holness will also meet members of the Embassy staff as well as members of the Jamaica Central Labour organization which handles the US Jamaica Farm Worker Programme.

The Prime Minister is expected to return to the island on April 3, 2022.

Prime Minister Holness will be the first Jamaican leader to visit the White House since a 1995 working visit by former Jamaican Prime Minister P.J. Patterson.