BELMOPAN, Belize – Prime Minister John Briceño is asking Belizeans, who are paying more for basic food items, to bear with his administration as it joins other Caribbean nations in seeking a remedy to the high inflation caused by increased global prices for oil and gas. 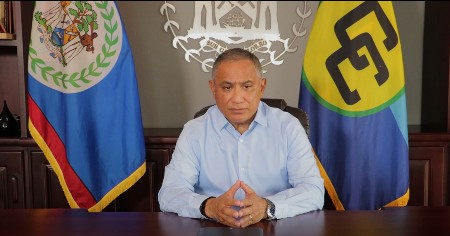 Prime Minister John Briceno. (Photo courtesy of CARICOM)According to the Statistical Institute of Belize’s (SIB) Consumer Price Index report in May 2022, the overall cost of goods and services in Belize increased by almost seven per cent in the last year.

“We know what they are going through. We understand and as a government we are trying to do everything possible to be able to try and help them. We are trying to see how we can control the price gouging.

“We are trying to work on the issues of the duty that are being charged on these products. The government has certain social interventions that we do yet with for instance grocery bags and so forth, and we are working on the minimum wage,” Briceño said.

He said that the government is hoping that by the end of this year it will implement the minimum wage “and these are the things that can help, and also that we are doing everything possible to be able to get the economy back working again.

“Even this last first quarter we had growth of over five per cent. It says something, we are moving in the right direction. As I tell everybody, the best social program we can have going in Belize is putting people back to work.

“That is what we have been doing and I want for them to understand that we are doing everything possible to make their lives better, that we everyday think about them and trying to find ways to improve lives and make it easier and that we understand and feel for them.”

But Prime Minister Briceño acknowledged that with oil prices now above US$100 a barrel, the price of fuel on the local market is expected to see a gradual decrease.

He said the government must first recover the revenues it lost after decreasing the excise duty for diesel and regular gasoline as a relief to Belizeans.

The Ministry of Finance has estimated that the loss is in excess of eight million dollars (One Belize dollar=US$0.49 cents) in the last three months.

“The idea as I mentioned earlier is to hold it at a price, hold it at where it is right now, and as the acquisition cost of fuel goes down we still want to hold it to be able to recoup some of the expenses, or the tax dollars we lost.

“At the end of the day we do need the revenues to provide these services to the Belizean people. We said from the beginning, and we never shied from that, the idea is to set up a fund from Central Bank so as we reducing the tax we could try to replace it. We did not do that right now, but when the prices start to go down we can keep it there to try to get back some of it, not all of it, some of before we bring down the price of fuel.”

PetroCaribe is an oil alliance involving 18 Caribbean member states. The alliance was founded in 2005 with Venezuela offering the other member states oil supplies based on a concessionary financial agreement.

In 2013 PetroCaribe established links with the Bolivarian Alliance for the Americas (ALBA) aiming to go beyond oil trade and promoting economic cooperation.

“Maybe it might not be as generous as it was before, but we are still looking at maybe paying seventy cents on the dollar or something like that, but that itself is going to be a big help, should we be able to convince the Americans to ease up on the restrictions they have on Venezuela.”

Briceño said that the regional leaders brought it up when they met with President Joe Bidden and Vice President Harris at the Summit of the Americas.

“That is one of the topics we believed that indeed they should ease up the restrictions and also allow Trinidad and Tobago to be able to work with Venezuela, because they have large fields of natural gas. Because of the sanctions against Venezuela, Trinidad is not able to access that natural gas,” he added.