President Ali: Suggestion that Guyana is Pawn in Geo-Politics is "Absolute Nonsense"

GEORGETOWN, Guyana – President Dr. Irfaan Ali has described as “absolute nonsense” that his recent visit to the United States was part of an initiative by western countries to try to displace China as a major contributor to the socio-economic development of the region. 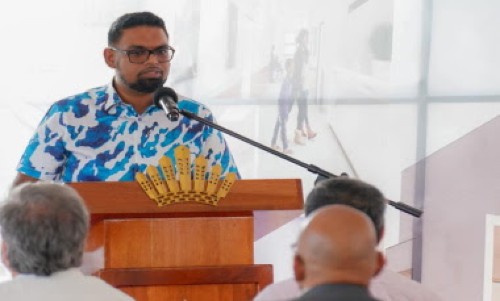 President Ali addressing the sod turning ceremony for new hospital (DPI Photo)“(I) saw some headline about this relationship and I went there and the US had ulterior motives in this region. Absolute nonsense!,” Ali said at the sod-turning Sunday for the construction of a multi-million dollar hospital being built under an agreement with Austria.

President Ali told the ceremony that Guyana would continue to have relations with many other countries such as Austria, China, United Kingdom, Chile and Cuba saying “you are friends, you are partners.

Ali said that his administration is keen on speaking with big and small nations alike as they are all part of the global community and criticized  the media and others for their headlines and “reckless statements” while he and his delegation were busy holding talks in Washington.

Late last month, former president Donald Ramotar told a public forum marking the 50th anniversary of Guyana-China relations that it was clear that western countries were intent on eliminating Chinese influence in the region rather than providing development finance.

“While I appreciate and I am happy that they are coming on board to help developing countries with infrastructure works and other works, as China is doing now, what is of worry for me is the motivation for why they are doing it.

Regarding the recent signing of the two billion US dollar memorandum of understanding (MOU) with the US Export-Import (EXIMBANK) during his visit to Washington last week, President Ali told the audience “it’s normal that a US agency- the EXIMBANK would sign an MOU and put an indicative figure inside but it speaks to the seriousness of the relationship and the bilateral partnership and strategy the US and Guyana are embarking on.

“We had very frank, very frank discussions… that’s dealt ultimately with what is the best interest for each country and together what is best for the relationship.

Ali said that some of the discussions with the international community focused on the controversial March 2020 general and regional election that brought his People’s progressive Party/Civic (PPP/C) to office.

“Let me tell the naysayers something: it is not easy to go into a room to hear about your country’s democracy records and election records as a negative against your country and we have to spend hours dismantling that negative or perception about our country,” he added.