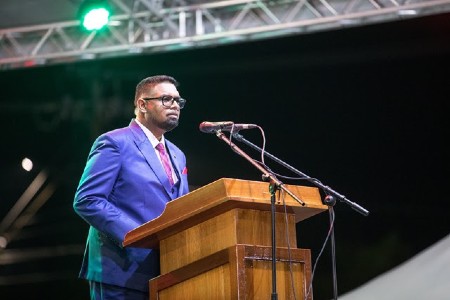 President Irfaan Ali at the 56th Independence Anniversary celebration in Anna Regina, Region Two.Delivering his address at the independence celebration in Region Two on Wednesday, he said Guyana is on an upward trajectory that is like no other, and while the country is recording phenomenal numbers in its economic growth, the government recognizes that the people’s lives cannot be measured by numbers, they must be able to witness the growth and development.

President Ali highlighted the government’s effort to improve the country’s transportation system, noting that two major contracts have already been inked which will contribute to the hours of being in traffic to get to work or to transport goods becoming a thing of the past.

The health of all Guyanese is also of importance the President said, as he announced major healthcare plans for the county and the country as a whole.

Within weeks, the President said government will sign a contract for six regional hospitals worth US$180 million, one of which will be constructed in Region Two.

He said the government will be signing another contract for over US$175 million for a modern National Maternal and Child Care Hospital that will bring some of the best health care for mothers and children.

Government, he added, has already taken steps to fix the healthcare procurement system to ensure people are held accountable. The president said investing in infrastructure alone will not fix the problem in the health sector, and that is why the government will invest in building its human resources.

He noted that like the government, nurses and doctors must also be held accountable for the service they deliver to the people.

Like the people on the coast, Guyana’s first people must also have access to the best of healthcare.

“We are also working on four major telediagnostic centers in Regions One, Seven, Eight and Nine that will upgrade to regional  hospitals. We have a plan to train and recruit a large number of healthcare professionals in the next few years to deliver not just health service, but the finest world-class health service to the people of Guyana.”

Added to that, the President said government will be providing incentives to the private sector to participate in the country’s health sector.

Residents of Region Two were also informed that Guyana is well advanced in providing cheaper and cleaner energy through a number of renewable sources. The gas to shore project, the Amaila Falls hydro project, and a number of solar initiatives both on the coast and hinterland are among the plans.

Cheaper energy, the President outlined, will help to propel a number of sectors, especially that of agriculture, as Guyana will be able to produce its own fertilizer which is critical to the advancement of the sector.

“We have secured through the LCDs the sum of US$85 million that will be deployed before the end of this year to produce 35 megawatts of solar power in Berbice, Linden them and yes, right here on the Essequibo coast so that you could benefit from the 50 per cent reduction of energy costs and have energy delivered to you in a sustainable renewable form.”

The President made it clear that there will be no stumbling block to the country’s prosperity.

“We are on a forward-looking trajectory, let us not be persuaded or dissuaded from the one true way of moving this country- that is the ‘One Guyana’ platform,” he said.