BRIDGETOWN, Barbados – Prime Minister Mia Mottley says her government is simply “doing the right” thing in amending the 55-year-old Barbados Constitution to change the qualifications for membership in both houses of Parliament. 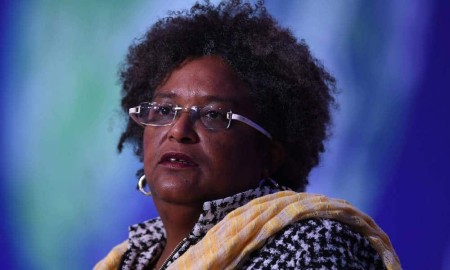 Prime Minister Mia Mottley. (Getty/Daniel Leal-Olivas-Pool)She told legislators on Tuesday that her ruling Barbados Labour Party (BLP), which won all the 30 seats in the January 19, general election, was “correcting a wrong” by reducing the age for eligibility to sit in Parliament to 18, and giving a voice to the opposition by allowing them to recommend appointments to the Senate even when they hold no seats in the House of Assembly.

Mottley said the importance of the Constitution reflecting the reality of society, and insisted that Parliament, often used in the past as an instrument of oppression, must be “a tool of empowerment for our people.

“This government is doing this because it is the right thing to do, both for purposes of non-discrimination on the basis of age and for inclusion in terms of voices who have a legitimate right to be heard and to be represented in our nation, even if not in the Lower House,” she said in her contribution to debate on the Constitution (Amendment) Bill 2022 that was introduced by Attorney General Dale Marshall as the House met for the first time since last month’s polls.

The most controversial of the amendments seeks to give a political party with the second-highest votes in a general election the opportunity to appoint two Senators where there is no Leader of the Opposition. The other reduces the age of eligibility for the Senate and the House of Assembly from 21 to 18.

“I believe that if we want our young people to be agents of fairness, if we want our people in society not to discriminate against each other, then the two principles that these constitutional amendments speak to are vital – non-discrimination on the basis of age and inclusion on the basis of relevance and participation, because the Democratic Labour Party and other political parties, even though they did not win the election, received support from citizens of our nation and residents of our nation and those citizens and residents have a right in a restructured Parliament and in a restructured Barbados to have their voices heard,” Mottley insisted.

Prime Minister Mottley was adamant that despite its whitewash at the polls, the 67-year-old DLP, the country’s main opposition party, has a role to play in government and governance.

“If they choose not to play it that is a matter for them. But I trust and pray that they will understand that this goes beyond the politics of the day and that this goes fundamentally to the strengthening of our democracy.”

Mottley saying that it was to her “certain knowledge that during the course of this term there are a number of appointments and a number of commissions that will come up for reappointment”, reiterated that the amendments go further than Senate appointments and also spoke to the opposition selecting members for critical positions.

“I do not believe that any Prime Minister should have the right to choose all five members of the Electoral and Boundaries Commission. I do not believe that we should ignore the requirements for the level of consultations across divides that would want us to have service commissions and other elected persons in our Constitution to reflect that unity of purpose that we would want to see on affairs of a national state.

“And it is against that backdrop, therefore, that even though the President has the right in her own absolute discretion to appoint two senators in the absence of an opposition, that that does not solve the second part of the equation – which is, how do we facilitate greater consultation, particularly in the appointments to posts or commissions that exercise great power in this country?” the Prime Minister said.

She added that despite being told that she was “giving people a whip to beat you” by extending the opportunity for Senate representation to the DLP, her government had to “do the right thing”.

“Principles only mean something when it is inconvenient to stand by them,” Mottley told legislators.

On the issue of the age qualification to sit in Parliament, the Prime Minister, who has proposed 18-year-old Khaleel Kothdiwala be appointed to the Senate, said it gave her great pleasure to “correct a wrong that really ought to be corrected”.

“To have a young man or a young girl be able to vote in an election, but to deny them the right to vote for themselves by being a candidate in the very same election is wrong, and where we see wrong things we have a duty to correct them wherever possible,” said Mottley.

“In this particular instance, it has been triggered by the desire of my government to appoint a young man who we believe has tremendous skill and ability, to share a perspective for that category of person in our society who, though Barbadian and young, do not necessarily feel as though they are engaged in the major discussions of our nation,” added Mottley.

In piloting the legislation, Marshall defended the government’s decision to allow opposition representation in the Senate, insisting the move is to “give those individuals who did not win at the polls, a voice in our affairs”.

“We feel it is important that at this time we take some steps to enshrine the deepening of our democracy. There are those who say we are tinkering with the Constitution and that we should leave such matters until we get to the review and the consideration of a new Barbados Constitution. But, Mr. Speaker, what happens until then?” the Attorney General questioned.

Marshall said even though the President has discretion under the Constitution to appoint Senators, the amendment would offer guidance in the case where there is no Leader of the Opposition to make recommendations for appointments.

“All that we are saying is that for the purposes of deepening our democracy, we should stipulate that that should be governed by some political nuances,” he said.

Last month, the DLP’s interim president Steve Blackett rejected Prime Minister Mottley’s suggestion that the party choose two Senators. He said at the time that Mottley did not have the power to make the offer. However, he subsequently told the online publication, Barbados TODAY, that the party would be monitoring the debates on the constitutional amendments in both houses of Parliament before making a final decision.

The Attorney General told parliament that if the DLP rejected the offer, he was sure other political parties who contested the polls would be interested.

“But what is important, Sir, is more concept than the action, because in addition to the matter of appointing senators, the Leader of the Opposition also has a role to play in the appointment of judges and the appointment of various service commissions. The opposition has the right and, in fact, the duty to appoint to the Electoral Commission, a deputy chairman and, I believe, two other members.

“As the law stands, because there is no Leader of the Opposition, the Prime Minister has the right to nominate everybody…. But [the constitutional amendment] is about protecting our democracy, and time after time since we have come to government as an administration we have taken decisions which curtail our powers.”

Marshall also addressed the amendments relating to the age of eligibility for the House of Assembly and the Senate. Currently, that age is set at 21.

However, under the Constitution (Amendment) Bill 2022, an 18-year-old citizen of Barbados would be qualified to be appointed a Senator; while any person 18 years or older who is a Barbadian citizen and resident is eligible to be elected as a member of the House of Assembly.

Marshall suggested that even in the absence of that proposal, the time had come “to recognize that promising individuals, having achieved the age of majority, should not have an artificial ceiling placed above their heads that would determine how far they could go at the age of 18”.

The Attorney General questioned why 18 year-olds could vote, work, buy and consume alcohol, among other things, yet could not serve in Parliament until they reached the age of 21.

“There is something inconsistent about a country that says that at 18 you have the necessary intellectual depth and personal maturity to be able to select Dale Marshall as your representative but you cannot consider being a representative yourself.

“There are many of us who recognize 18 year-olds of great intellect and promise and who demonstrate maturity way beyond their age, and all we’re saying is that when those diamonds begin to show promise at 18, there is absolutely no reason why the opportunity should not be made available to them to serve in those offices,” Marshall added.