WASHINGTON, DC – Barbados Prime Minister Mia Mottley on Wednesday made an impassioned plea for the United States to reverse its decision regarding correspondent banking in the Caribbean telling US legislators not to allow “this to be recorded as unconscious bias. 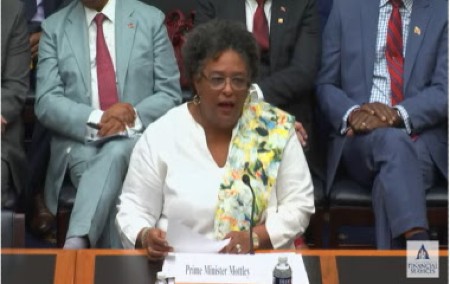 Barbados Prime Minister Mia Mottley testifying before United States House of Representatives Committee on Financial Services (CMC Photo)“Look at the list of countries who are listed and you will see they are all former colonies and people of color. And look at the countries, in spite of being able to open a bank account in hours in Delaware or Wyoming, within hours in Luxembourg or Zurich and they remain off of this list that speak about the risk to money laundering and look and see where the divide comes,” Mottley said.

Testifying before the United States House of Representatives Committee on Financial Services, Mottley, flanked by several CARICOM prime ministers, said she believes the Committee has a “keen eye for fairness and equity and all we ask today is for a level playing field.

She told the hearing on “When Banks leave: The impacts of De-Risking on the Caribbean and Strategies for Ensuring Financial Access,” that one of the solutions, the Caribbean would like to leave “is that the Treasury ought to be truthful to its mandate.

The Committee hearing follows a similar session held in Barbados earlier this year involving the Committee’s chairman, Maxine Waters and other US legislators.

Mottley said she wanted to thank the Committee “for hearing seeing us today, for hearing us, feeling us, because for too often we have not done so.

“We are here because we are fighting for a global public good and we are fighting for the human rights of our citizens. This Committee has already expressed its concern about financial exclusion of the American population…our people are no different”.

She told the US legislators that growing up in the Caribbean, opening a bank account was regarded as “part of our right of passage to becoming an adult. Today it is now a gigantean obstacle for us to have our people do so”.

Mottley said that foreign investors and locals alike, spend “weeks and months, just to open a bank account as individuals to live and as companies to trade in business.

“We are here because the listing process that has taken place whether through the Financial Action Task Force (FATF), the OECD (Organisation for Economic Co-operation and Development) or further, as a result of actions taken for enhanced due diligence by those who take listing from the FATF or the OECD”.

She said it means that those correspondent banks over the last 10 to 12 years “have made a judgement that we are simply too small…because the enhanced due diligence means increased costs of regulations, increased costs of compliance”.

She said rather than do business with the Caribbean, these banks say “thank you, but no thank you.

‘What it is meant is that almost every country in our region over the course of the last decade with the exception of two or three have had a loss of more than 30 per cent of their correspondent banking relationship.

“The truth is we have also seen others use alternative mechanisms…and therefore what we face is that the very thing that you set out to achieve, which is the avoidance of terrorism financing, the avoidance of money laundering to which we all agree is likely to happen because you are driving people underground”.

Mottley said there is no benefit in driving Caribbean people underground or making the region uncompetitive and the economies becoming underdeveloped or failed states.

‘We have been making noise for near a decade and we want to thank this Committee for hearing us today because that noise cannot continue,” Mottley said, noting that ironically with the technological development these days “there are options becoming available to countries to opt out of the swift system and to find other ways of being able to transmit monies to their citizens”.

She said that while this option is not yet available to the Caribbean, “but given long enough nature abhors a vacuum and we will find a way”.

Mottley reminded the legislators that following the invasion of Ukraine by Russia and the sanctions imposed on Moscow, it was soon discovered that most of the assets held by Russians were not in Caribbean banks, but in Europe and the United States.

“If you don’t use this example to show why this is an appropriate time to take different action, we will continue the injustice,” she said, adding “Russia did not choose the Caribbean to hide its money…they chose the metropolis, they chose London, New York, Switzerland, Luxemburg.

“And you only have to…follow the money…it hasn’t come to the Caribbean,” she told the legislators.