KINGSTON, Jamaica – Prime Minister Andrew Holness has pointed to the importance of historical monuments, saying that while there is a tendency to downplay the building of monuments, they are important historical reminders which should be viewed and treated with respect. 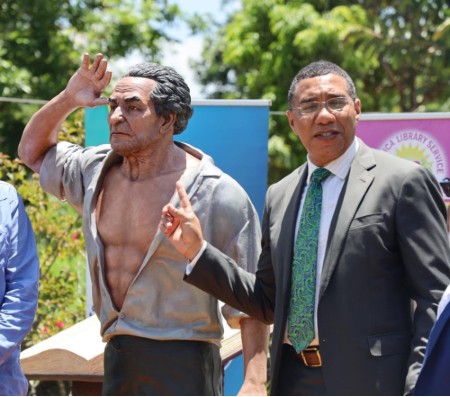 Prime minister Andrew Holness at the unveiling of the statue of Sir Alexander Bustamante at the Hanover Parish Library in Lucea, Hanover. (Photo credit: Twitter @andrewholnessjm)Holness was speaking at the unveiling of the official statue of the island’s first Prime Minister Sir Alexander Bustamante at the Library in the western parish of Hanover on Friday.

He said a quick look back at pre-independent Jamaica will show that there have been many sacrifices by individuals as it relates to nation building, and monuments…some in the form of statues…are being erected to recognize those efforts.

“There is a sense in Jamaica , and I have been observing conversations, that if you spend resources on improving infrastructure such as building a new monument…like improving a civic building…building a new parliament for example…there is a sense that it is a waste of money…that we shouldn’t do that as there are other [important] things that the money could be used to do. And I am certain that all of you here and those listening on social media would agree that there are other things that that $3million [the cost for building the Sir Alexander statue] could be used to do,” he said.

“What is the value of putting up a monument…a historically significant monument, or what is the value of improving the infrastructure for civic administration or for our heritage…what is the value of that? [And] particularly if you juxtapose that against other important things like sending 300 kids or so back to school or fixing a lot of potholes along the road.”

The Prime Minister said that while he would have no argument with the merits of putting resources into addressing other issues, there, however, needs to be a better understanding in the public discourse about what the symbols of “our civil bureaucracy” and “our civil administration…and what the monuments of our history mean.”

Holness said he is of the view that there is a kind of disconnect between the populace and “these very important institutions”, noting that it is a disconnect which leads to the “devaluation of them.

“The irony of course is that the more we devalue our history…the more we devalue monuments…. our civil bureaucracy and our administration…the less likely that they will perform to the standards that we would want them to,” he added.

The Prime Minister also spoke of the deep legacy of Sir Alexander –  one of the pioneers of Independent Jamaica – and said the nation, in reflecting, must think of the struggles and hardships “we overcame” in the past and draw strength and inspiration to overcome today’s difficulties as “we partner” for a better Jamaica for each one of our citizens.

Sir Alexander was born in Hanover on February 24, 1884. From the early 1900s he began agitating for better pay and working conditions for those on the plantations. On September 8, 1940, he was detained at Up Park Camp (the headquarters of the Jamaica Defense Force) for alleged violation of the Defense of the Realm Act and spent the next 17 months there.

He continued his advocacy on his release, and in 1943 founded the Jamaica Labour Party.

Universal Adult Suffrage was granted in 1944, and in the first general election under that system, the JLP won 22 of 32 seats. Sir Alexander later became the first prime minister of independent Jamaica in 1962.

He retired from active politics in 1967 and in October 1969, was conferred with the order of National Hero. Sir Alexander – died  on Jamaica’s anniversary of Independence, August 6, 1977.