BELMOPAN, Belize –Prime Minister John Briceño has brushed aside opposition calls for the dismissal of his Minister of Home Affairs, Kareem Musa, and the resignation of Commissioner of Police, Chester Williams, amid concerns being raised regarding the crime situation in Belize. 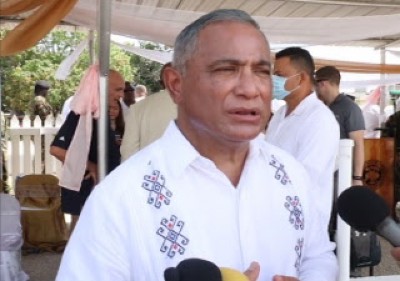 Briceño told reporters that the late former prime minister, George Price, used to remind his cabinet about praises coming from the opposition and as a result force his ministers to “sit back and think what stupid thing you have done.

“When you compare what our Minister of Police presently, Honorable Kareem Musa, is doing, comparing to what the previous Ministers…Kareem has been doing an excellent job with the hand given to him.

“There are many systemic problems we have to address in the Police Department,” Briceño said, adding “as to the issue of the Commissioner and the people around him, when you look at it, the Commissioner is the person that has the most experience at the time to be able to help us.

“We are saying; let’s use your experiences, not only as a police officer, but also as an attorney that we can use his knowledge of policing, his experience, and his ability. That is something we have to use. So, working together with him openly and transparently, we are starting to see some results,” Briceño added.

Meanwhile, Musa said in relation to the request again for his resignation, “I think Belizeans are not in any way fooled by the noise that is being made.

“They realize that the previous government had 13 years of an opportunity to fix crime in this country, and you can see from just the statistics over the last year and a half, even in COVID where financially and economically we took a hit. Even then, crime was down.

“So, people are not stupid. They understand that crime is a very complex issue. They understand that the programmes and the initiatives that we are putting in place is not an overnight fix. I know that the previous administration, or the representatives now, the ones that are making the noise, are calling for a state of emergency. I am saying to them that is only a band aid temporary fix.”

Musa said he is against “creating monsters” who when they come out of prisons continue to commit crime.

“I am not in any way saying we are not going to have another state of emergency, because there comes a time when too many people are being killed. We have to realize that, and the retaliations are just ongoing, we have to say there needs to be a pause, a time out because it is getting really out of hand. I am not saying that is not an option. I am saying that is not a remedy to crime. And, that is what the United Democratic Party feels,” Musa added.

Last year, Belize recorded 125 murders and in February this year, the country was ranked fifth in Latin America and the Caribbean (LAC) with a homicide rate of 29 per 100,000 persons.