WASHINGTON, DC – The Organization of American States (OAS) is pleading for urgency to continue working to increase security in Haiti and to begin the democratization process. 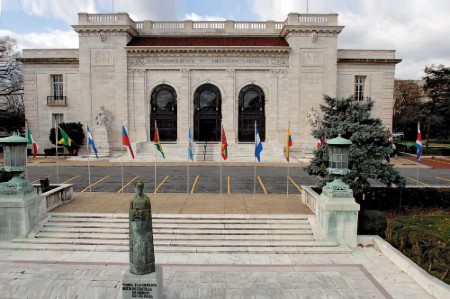 Photo courtesy of the Organization of American StatesThe OAS said in a statement that the institutional crisis that Haiti is currently experiencing is “a direct result of the actions taken by the country’s endogenous forces and by the international community.

“The last 20 years of the international community’s presence in Haiti has amounted to one of the worst and clearest failures implemented and executed within the framework of any international cooperation.

“This is not to blame the individuals who, with a vocation for service and altruism, worked as co-operators and made their best efforts, in some cases giving their lives, for Haiti. These persons deserve our greatest respect and remembrance,” the OAS said.

It said that instead, this failure has to do with 20 years of erratic political strategy by an international community that was not capable of facilitating the construction of a single institution with the capacity to address the problems facing Haitians.

“After 20 years, not a single institution is stronger than it was before,” the OAS said, adding that it was under this umbrella provided by the international community that the criminal gangs that today lay siege to the country “fermented and germinated, even as the process of deinstitutionalization and political crisis that we see today grew and took shape.

“Then, seeing its failure, the international community left Haiti, leaving chaos, destruction, and violence behind. Right now, it is absurd to think that in this context of destruction, the Haitians, left completely alone, polarized, and with very few resources, would be able to rebuild or build the kind of security, deinstitutionalization, and development project that could enable its 12 million inhabitants to once again live in peaceful coexistence.

“Without resources, in a climate of violence, without technological capabilities, without financial accumulation, without any of that today, they want us to believe a completely endogenous Haitian solution could prosper. This is not so.”

The OAS said that without the basic conditions of democracy and security, the French-speaking Caribbean Community (CARICOM) country is suffering from “the international community’s lack of ideas and real capacity, as well as from its own structural problems.

The OAS said the exercise of power in keeping with the rule of law and administrative and institutional efficiency in providing solutions to Haitians’ problems are “basic conditions for the functioning of the State that were never guaranteed by the international community in Haiti, that were never built by the international community in Haiti, and that Haiti fundamentally does not have.

“This must be resolved by Haitians, there is no question about that. But the international community has a role to play. Haitian society is very vulnerable and polarized. Its institutions are weak, its organizations are weak, and the path must be struck toward building them from zero, or even less than zero.”

The OAS said that without reducing polarization, without building capacities and bridges between Haitians, this will not be possible.

“Without dialogue, it is impossible,” it said, adding that “building Haitian democracy means encouraging capacity for dialogue, which includes building mutual trust among the various social and political actors in Haiti.

“Today, there is no system of checks and balances, neither politically nor socially. On the contrary, violence is prevalent, as is the abuse of force internally, actions with criminal intent, failed institutions, and a lack of civil society capacity.”

It said that bringing peace to the country demands “an absolutely critical step (and) there must be justice for the assassination of President Jovenel Moïse” who was gunned down at his private residence on July 7, 2021. No one has been officially charged in Haiti with his murder even though several former Colombian army officers have been held in connection with the assassination.

“Without shedding light on the truth and without justice, no progress can ever be made towards reconciliation and harmony,” the OAS said.

It said to begin to address these issues, a number of processes must be built up including an institutionalized and inclusive process of dialogue that includes all the political forces that can possibly be brought together for it; a trustworthy, fair, transparent electoral process; and an institutional security process for the country.”

The OAS said these processes require the cooperation of the international community “obviously in everything with regard to the necessary resources, whether financial, human, or material.

“We would be fooling ourselves to think that any of this could be built without the support of the international community, that none of these processes are needed to ensure the country can find its way out of the crisis facing it and that still impacts the country’s political and socioeconomic outlook.

“Therefore, the responsibility for paying this bill falls to only a few who must not and cannot delay in taking up their responsibility, as time is running out for Haiti, with everything that is happening simply worsening the situation,” the OAs added.