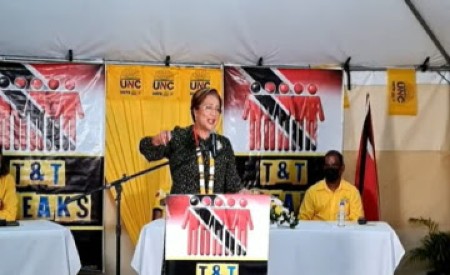 Opposition Leader Kamla Persad Bissessar addressing party supporters on Thursday night (CMC Photo)Speaking at a public meeting on Thursday night, Persad Bissessar said that the government will be bringing to Parliament on Friday, a bill to “allow CARICOM nationals that is from Grenada, St. Vincent and all the CARICOM countries….cousins, brothers and sisters” to work here.

“I have no problem with those in the CARICOM, we all share a common history, common thread, common culture …and they want to allow workers from the CARICOM islands to come to Trinidad and Tobago to work.

“Nothing is wrong with that, but not at this time. Just two days ago you fired over 400 TSTT (Telecommunication Services of Trinidad and Tobago) workers and under (Prime Minister Dr. Keith) Rowley’s watch over 120,000 persons have lost their jobs”.

Persad Bissessar, who led a coalition People’s Partnership government here between 2010-15, questioned why the government would be seeking to encourage workers from the region to come here “when Trinis and Trinbagonians cannot get a job.

“So we will not be supporting that bill …. We will not support it because we say …they always tell us home first, take care of your home”.

She told supporters the category of workers being encouraged to come here are not the type the country needs for its development.

She claimed that many people in the various oppositio9n held constituencies were coming to them begging for a chance to be employed “and there is nothing we can do”.

The government has already successfully moved the amendment in the Senate, which seeks to amend the Immigration (Caribbean Community Skilled Nationals) Act, that will among other things, expand the categories of skilled nationals from other qualifying Caribbean Community State to enter Trinidad and Tobago under the CARICOM Single Market and Economy (CSME) regime.

The CSME is an arrangement among the CARICOM member states for the creation of a single enlarged economic space through the removal of restrictions resulting in the free movement of goods, services, persons, capital and technology.