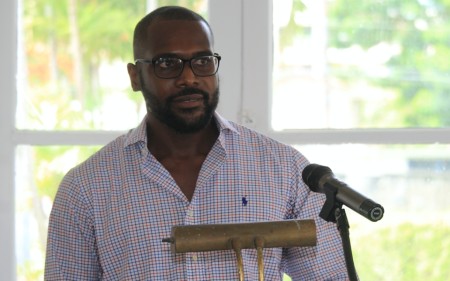 Dr. Ronnie YearwoodYearwood, who was declared the winner on Sunday night after defeating veteran politician, Dr. David Estwick by a margin of 273-205 following an all-day voting exercise,  immediately called on supporters “to come back home” as he embarks on the road to make the 67-year-old party, the political force it had once been.

In the last two general elections, the DLP lost by a 30-nil margin to the Barbados Labour Party (BLP) for control of Parliament.

Yearwood, who was among the DLP causalities of the January 2020 general election, told cheering supporters that he was now calling them back to the fold adding “this party calls you to arms, calls you home … I want you to come home.

“During the recent general election campaign, I talked about this party as a big tent, I talked about the fact that better days are ahead of us and we can all walk in the sun together and I invite you into this tent.

“I want you to feel part of this family and anyone hearing my voice knows that this is one Democratic Labour Party family and that we are ready and we are preparing ourselves to serve you,” he said.

Yearwood noted that in the coming months the party will be rolling out a suite of programs and policies, and would also be talking and listening to the public.

Earlier, economist Carlos Forte, addressing the DLP conference by video, cautioned that the party’s reconstruction cannot be dependent on one person but rather a team that is competent, steadfast, loyal and ready to govern with love of country and party.

Forte said it would require a team that works together, supports the party leader while holding him or her accountable to the highest standard of leadership, integrity, humility, compassion, resolve, love of country, love of party.

On the topic of support for the new leadership, Forte told members to either give him their support or “stay out of his way.

“The DLP is a democratic institution and it should behave as such. If it is to reclaim its heritage as a formidable political institution the DLP must aspire to be exemplary in office and out of office. Do not undermine your new president with political machinations and do not allow narrow personal ambitions to damage your party, or derail the national agenda to make Barbados an excellent place to live, work, play and raise a family.

“Push him to be better, hold him accountable within the bosom of the party, do not criticize him publicly. If a challenger emerges, let him or her bid for the leadership at the ballot box,” Forte said,

He outlined what he felt were the measures needed for the DLP not to repeat the defeats of 2018 and 2022, including laying out of a vision for the party and country that ignites the base, expands the DLP tent and unifies every stratum of party and country towards a prosperous, socially inclusive, civic minded Barbados.

“To achieve this, the DLP cannot afford to pretend that 2018 and 2022 did not happen, the DLP and its leadership cannot afford to sweep the failings of its last two administrations of government under the carpet.

“Equally, I must hasten to point out, it can neither afford to cower in the face of ridicule or lie down and die. Do not be distracted by your detractors, or allow the BLP and its operatives to frame the political narrative and set your agenda.

“You should also avoid the temptation of framing your efforts as rebuilding, rather you should see your task ahead on building on the progress of your forebearers including the work that was done by Verla DePeiza and her team in the three and a half years that followed the unprecedented red wash in 2018,” Forte added.