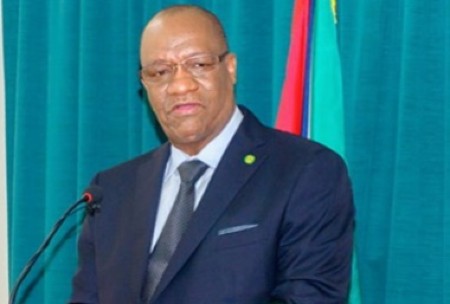 Opposition Leader Joseph HarmonIn a message marking the country’s 55th anniversary of independence, Harmon said while political independence from “our colonial masters in 1966 introduced some freedoms…what it did not permit was economic independence”.

The Opposition Leader said that for the first time in country’s history, “economic independence is a real possibility given our abundant oil and gas resources.

“This possibility however has come about when the issues of the negative global consequences of fossil fuels are a growing global concern. The issues of climate change and the COVID 19 pandemic could not be more present nationally and beyond.

“Guyana therefore has a sharpened responsibility to ensure that we mitigate the proven downside of oil by the responsible management of its extraction and the monies garnered from it,” he said in his message.

He said with a population of less than one million and the decades of outward migration, it is incumbent therefore, on the government in particular, to offer security and a sustainable future to those Guyanese who have remained.

“This security cannot be only about elections as important as that is but rather about wellness and wellbeing as a whole. The COVID-19 pandemic has exposed many fault lines in our health systems and our access to information.

“Our death rate is too high, our infection rate is too alarming and our vaccine roll out is too slow,” Harmon said adding that the coalition opposition A Partnership for National Unity and the Alliance for Change (APNU+AFC) would be “redoubling our efforts and encouraging others to join our national push for increased vaccinations as we cannot afford to lose another citizen”.

Harmon said that the controversial March 2 regional and general elections last year “have scarred the nation and once more opened the floodgates of vitriol, distrust and unproductive racial stereotyping.

“As disturbing as it was to witness the regrettable outpouring of hatred and intransigence, it has afforded us the opportunity to bring intolerance out of the shadows and deal with it decisively without blaming and shaming.

“Let us not sweep it back under the carpet, but rather commit at every level, personal, institutional, political, governmental, social, to consciously, resolutely, and patriotically rid our society of this divisive affliction,” Harmon said, adding that “I cannot think of any Guyanese who does not recognize that ethnic insecurity has been the root of our historic barrier to nation building.

“This old colonial curse has been the mill stone to our joint and just development,” he said, accusing the ruling People’s Progressive Party (PPP) of engaging “in a systematic assault on real and perceived supporters and appointees of the APNU+AFC coalition’s administration,” since coming to office last August.

He said that the notion of oneness must never mean “we alone,” adding “this is certainly not what our independence heroes, women and men of all races, worked so hard to achieve in their quest for self-determination.

“The carefully nurtured culture of confrontational politics, fueled further today by social media, is further eroding the possibility and our capacity to build a nation.”

Harmon said it is the generational duty of all Guyanese to commit to a model of economic development now that “we have the financial resources.

He said the new model should not replace the old masters with new masters who are even less concerned about the wellbeing of the population.