Opposition Leader in Belize Steps Down Amid Domestic Violence Allegations

BELMOPAN, Belize – Opposition Leader, Patrick Faber, has resigned his position as well as that of the leader of the main opposition United Democratic Party (UDP) amid a domestic violence row that led to the police issuing a warrant for his arrest last week. 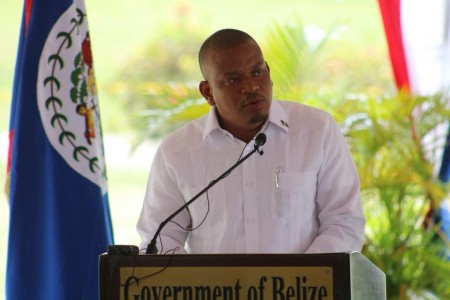 Patrick Faber (file photo)“It is with a very heavy heart that I stand before you today to signal my departure as Leader of the Opposition in the House of Representatives and leader of our great United Democratic Party. Both resignations I wish to become effective in a few days, on January 31st, 2022,” Faber, a former education minister, said in a statement.

Last week, Faber’s fiancé, Dr. Shanika Arnold, made a report to the Domestic Violence Unit where she made a complaint against Faber with Police Commissioner Chester Williams indicating that the report had been “one of a domestic nature where she is alleging that Mr. Faber has caused damage to her laptop and had also assaulted her as she was about to leave their home…”

Williams confirmed then that a warrant had been issued in the first instance for the arrest of Faber adding “the fact is that we have obtained a statement from her in which she had requested court action and so we will proceed with the matter before the court”.

However, Dr. Arnold took to social media to indicate that she had formally withdrawn her report in the presence of attorneys David Morales and O.J. Elrilater, describing the situation as a “misunderstanding,” and that it was the couple’s intent to resolve the matter privately.

But despite her statement, there had been growing calls for Faber to resign.

The Special Envoy for Families and Children, Rossana Briceño, tin calling for his resignation noting that the issuing of a warrant for his arrest and then the complainant withdrawing the charges is (quote) “a very common occurrence in the cycle of abuse.

“Our women need our support, not criticism, as they navigate the terrible scourge of abuse and violence. It is important that victims know they are not alone,” the Special Envoy said, adding that domestic violence is mostly perpetrated by current or former intimate partners.

In 2021, Belize recorded over 2,000 cases, almost 30 per cent of which are still open. The Special Envoy has called for a multi-sectoral approach to reach households, communities, institutes of education, businesses, and leaders to demand a zero-tolerance for violence against our women and families.

The Minister of Human Development, Dolores Balderamos Garcia, who is also responsible for Families, issued a strongly worded video statement calling for Faber to resign.

She spoke of what she believes might cause victims of such acts to make a report, but then change course, asking that no further action be taken.

She countered claims often made that domestic violence is a private concern, reminding Belizeans that it is a crime that must be taken seriously. She announced she would be asking Cabinet for additional resources to protect victims of abuse and deal with this public health issue in Belize.

UDP chairman, and former attorney general, Michael Peyrefitte, publicly condemned Faber’s behavior, saying “if we stand with the current situation, we will not get the respect of the Belizean people and it is my job as chairman of the party to say that we do not stand by that, me specifically as well.

“I have a seventeen-year-old daughter, how do I face her as the chairman of an organization whose leader, not once, not twice, three times involved or from what we know in these situations.  So I would hope that he would do the right thing and just step down,” he said.

Faber, who was due to host a news conference, cancelled the event and instead issued a statement announcing his resignation.

“While I maintain that the information circulating about matters with Dr. Shanika Arnold are not the facts, the ills that come with these allegations are simply too much of a burden for me to place on the shoulders of our beloved party and its faithful membership.  I have made a decision to focus my attention on giving my fiancée in this her time of need my full attention and support,” Faber added.

While he has announced his resignation as party leader, Faber sought to re-assure his constituency that he will continue to work in their best interest.

“First of all, let me thank all those who have supported me in my journey this far, in particular my family, my constituency, the greatest of them all, the Collet Constituency, my colleagues, the shadow cabinet, the central executive of the party and most of all, the faithful members and supporters of the UDP.

“Rest assured that my efforts remain committed for the people of Collet whom I will continue to represent and that I will still give my all to fight, as a member of the U.D.P., to secure a better country for all of us.  Long live Belize, long live the UDP,” Faber said.