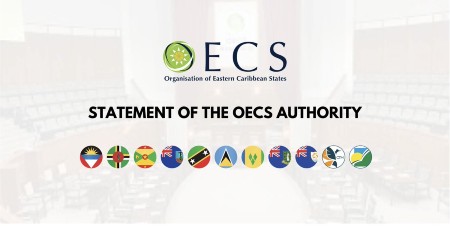 In a statement, the leaders of Antigua and Barbuda, Dominica, Grenada, St. Lucia, St. Vincent and the Grenadines, St. Kitts-Nevis and Montserrat said they had taken note of the position taken by the duly elected BVI government “which, while welcoming the recommendations arising from the Inquiry, rejects the intention of the British government to impose direct rule on the BVI.

“It is clear to us that, in principle, it is ill advised to impose direct colonial rule and the history of such imposition in the Caribbean has never delivered the desired result,” the OECS said in the statement.

On Monday, people in the BVI took to the streets outside the official residence of Governor John Rankin as they protested the recommendations of a report of a Commission of Inquiry (COI) that examined allegations of corruption and abuse of office by elected and statutory officials

The one-man COI has outlined several recommendations including that British Virgin Islands government cease to exist in its current format for at least two years. The protest coincides with planned meetings involving UK Overseas Territories Minister, Amanda Milling, with local stakeholders on the COI report.

Rankin said that the Commissioner had recommended “a return to Ministerial Government and an elected House of Assembly as soon as practicable, with the Governor taking regular advice from the Advisory Council and others on the earliest practicable date on which such government can resume.

In their statement, the OECS leaders said they agreed with the elected representatives of the people of the BVI that “abolition of Parliament with direct rule from London represents a retrograde step in the evolution of the democratic process that is inconsistent with the United Nations Proclamation of Human Rights to be free of colonial rule.

“The UN Declaration on granting independence to colonial countries and peoples – Resolution 1514 of 1960 is an international commitment to which Britain is itself bound.

“The historical responsibility for strengthening governance in the BVI must rest on the shoulders of the elected representatives and the people of the BVI themselves. That ultimately will be the guarantee of good governance and full, transparent accountability,” the leaders of the sub-regional leaders said, adding “we strongly urge the British government to work with and support the elected Parliament in this process of rectification.

“The OECS for its part, is willing and ready to provide technical and other support required by the BVI as an Associate Member State in addressing the governance issues that need attention.”

Meanwhile, the OECS has commented on the arrest of the BVI Premier, Andrew Fahie, in the United States last week on allegations of drug and money laundering.

Fahie as well as the managing director of the British Virgin Islands (BVI) Ports Authority (BVIPA), Mrs. Oleanvine Pickering-Maynard and her son Kadeem Maynard, have been charged with conspiracy to import a controlled substance and money laundering.

Fahie is scheduled for a pre-trial detention hearing on Wednesday when the court will determine whether to detain him without bail. He will then undergo a preliminary hearing for May 13.

“The Organization of Eastern Caribbean States has noted with great concern the evolving situation in the British Virgin Islands involving the arrest of Premier Andrew Fahie on alleged drug conspiracy charges.

“Like all persons charged with a criminal offense, Andrew Fahie is entitled to the presumption of innocence, procedural fairness, and a free and a fair trial within a reasonable time,” the OECS leaders added.