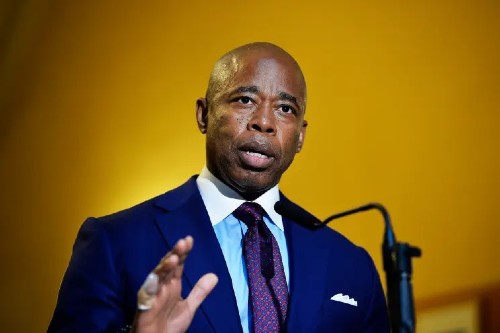 To mark the importance of this announcement, a Haitian flag-raising ceremony was held at Bowling Green, near Wall Street, in lower Manhattan.

“I am proud to be the mayor of the largest Haitian population in the United States and pleased to announce the additional US$1.65 million in funding that’s being provided to help newly-arriving Haitian New Yorkers,” said Mayor Adams. “These funds will provide much-needed services and resources that the city regularly provides to all immigrant New Yorkers.

“As we raise the Haitian flag, we say today and every day, that we stand with our Haitian community and will always have their back,” he added.

The Mayor’s Office said the state of New York is home to the second-largest population of foreign-born Haitians in the United States.

Through this initiative, the Office said community members will receive “linguistically and culturally responsive” case management, cash assistance, and support services directly and through referrals.

Additionally, it said the initiative includes a technical capacity-building component in which immigration legal experts provide training to staff at coalition community-based organizations (CBOs) to help them better understand immigration-related requirements and timelines, and effectively pre-screen and refer clients for immigration legal services.

The Mayor’s Office said the initiative will include a public information and education campaign, as well as interpretation and translation.

CBOs that will continue to receive funding to provide case management, legal and language services – building on the work they have been conducting since the recent influx of Haitian migrants began – include Catholic Charities of the Archdiocese of New York; Caribbean Women’s Health Association; Diaspora Community Services; Flanbwayan Literacy Project; Haitian Americans United for Progress (HAUP); Haitian American Community Coalition (HCC); Haitian Women for Haitian Refugees; and Life of Hope.

The Mayor’s Office said the Research Foundation of the City University of New York (CUNY) will provide support with contract and fiscal administration, and CUNY Brooklyn College’s Haitian Studies Institute will consult with partners to ensure information and services provided through the initiative are “culturally and linguistically responsive”.

“As co-chair and co-founder of the Congressional House Haiti Caucus and a Caribbean-American woman, I am so pleased to see my city not only celebrate the vibrant culture and gracious people of Haiti but embrace them throughout the trying times confronting them,” said Congresswoman Yvette D. Clarke, the daughter of Jamaican immigrants.

“Rather than repress an already hurting people, I believe it is now our moment to do the work that will uplift and support Haitian voices, wherever they arise,” added the representative for the 9th Congressional District in Brooklyn, New York. “Through the Haitian Response Initiative, it is a great comfort to know our city’s leaders share this essential sentiment.”

New York City Councilmember Farah N. Louis, the daughter of Haitian and Bahamian immigrants, said that “Haitians make up a fast-growing racial and ethnic group in America,” stating that, last month, she wrote to US President Joseph Biden asking him to proclaim May as Haitian Heritage Month “in recognition of our rich culture, heritage, and contributions to the United States.”

“Today, in New York City, we are taking a step forward by raising Haiti’s flag to honor and recognize the rich Haitian culture,” added the representative for the 45th Council District in Brooklyn. “As the first free, independent Black republic in the Western Hemisphere, Haiti served as the catalyst for other countries to fight for their independence. Today, Haitian Americans are essential to America as medical professionals during the height of the pandemic community leaders, and beyond.

“This monumental moment is proof that no matter what disaster Haiti and its people endure, the global community stands strong and vigilant, with current and future generations by their side,” Louis continued.

“As a proud Haitian immigrant, I know how crucial it is to prioritize the needs of Haitian asylum seekers,” said another New York City Councilmember, Rita Joseph, who represents the 40th Council District in Brooklyn. “New York is a city of immigrants and bolstering the city’s commitment to supporting newly arriving Haitian New Yorkers is a huge win for our community.”

Haitian-born, New York City Council Member Mercedes Narcisse, who represents the 46th Council District in Brooklyn, thanked Mayor Adams for “this very public display to the entire city and fitting tribute to the vast contributions of Haitian Americans here in New York City, a place where we welcome all immigrants with open arms.

“Haitian-Americans have undoubtedly contributed to the greatness of New York City, and, with our resolute Caribbean spirit intact, we will always push forward, because we are the living embodiment of the American Dream, and that dream, we should never let it die,” Narcisse added.

Porez Luxama, the Haitian-American executive director of the Brooklyn-based Life of Hope, said his organization is “so proud to be a part of this important Haitian Response Initiative.

“Mostly, we applaud Commissioner Castro and his office for taking action on the successful renewal for Fiscal Year 2023,” he said. “To date, we have been able to serve hundreds of the neediest because of this great program, and look forward to expanding on our work and capabilities.

“We, together, will also continue to advocate for the needs of this community,” Luxama added.

The Mayor’s Office said the initiative was originally launched in December 2021 “to provide key services and support to Haitian New Yorkers impacted by the natural disasters and political upheaval that have transpired in Haiti.”