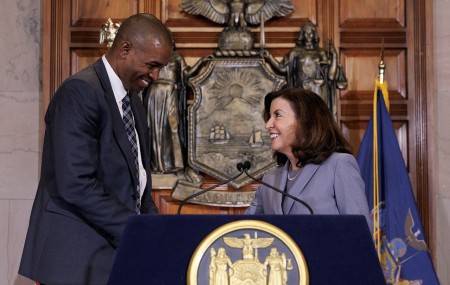 Gov. Kathy Hochul (right) has appointed Antonio Delgado (left) as Lieutenant Governor.Delgado currently represents New York’s 19th Congressional District, which includes the Hudson Valley and Catskills in Upstate New York. He is Afro-Latino, the first person of color to represent Upstate New York in Congress and a member of both the Black and Hispanic Congressional Caucuses.

“To do that I need someone by my side who I can rely on for wisdom, guidance, and advice, and that person must be willing to put New Yorkers first and place a high priority on delivering results, rather than playing partisan politics,” she added. “They must believe in hard work, be a team player, and treat everyone with respect. And most important, they must be someone that New Yorkers trust and have absolute confidence in. So today, I’m really proud to say, I found that person. Today, I’m announcing my nominee, my selection for the new Lieutenant Governor of the State of New York: Congressman Antonio Delgado.”

Hochul said Delgado is no stranger to hard work and to public service, stating that he has been serving New York’s 19th congressional district, since 2018.

“And as we went down the list of candidates for this job, his name kept rising to the top. But if you follow politics, this should not come as a surprise,” she said.

Delgado said he looked forward to serving the people of New York.

“I will humbly continue to do this work and be very diligent as your Lieutenant Governor, as we embark on this journey together. I look forward to connecting with diverse communities all across New York. I look forward to building meaningful relationships, to tapping into the goodness of our collective power,” he said.

United States Attorney for the Southern District of New York, Damian Williams, announced early April that Benjamin, the son of a Guyanese mother and Jamaican father, was charged for crimes committed based on his use of his official authority while a New York state senator to direct a state-funded grant to an organization controlled by a real estate developer in exchange for campaign contributions made and procured by the developer.

He pleaded not guilty at a short appearance in Federal District Court in Lower Manhattan and was released on a US$250,000 bond.