WASHINGTON, DC – Caribbean American Democratic Congresswoman Yvette D. Clarke says she was “elated” to vote on Friday for the passage of the Inflation Reduction Act. 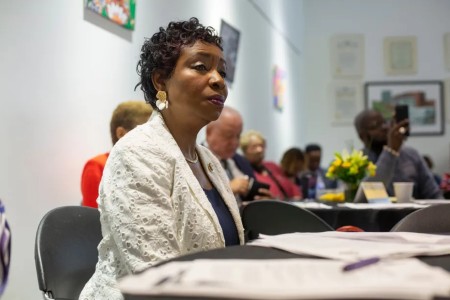 “Though the journey to today has been challenging, I am at long last elated to know the change Americans need and demand has arrived,” Clarke, the daughter of Jamaican immigrants, who represents the 9th Congressional District in Brooklyn, New York, told the Caribbean Media Corporation (CMC).

“For communities of color, our seniors, pregnant and postpartum people, individuals and families living with low incomes, and all others who long borne the brunt of too many hardships to list, the Inflation Reduction Act represents the vital initial steps they have so long and desperately awaited,” she added. “As the largest-ever investment from Congress to fight the climate crisis, this legislation will directly prevent thousands of premature deaths by improving air quality in densely populated communities with high environmental justice needs.

“When coupled with commonsense reforms that will allow Medicare to negotiate prescription drug prices and cap out-of-pocket costs, and additional Affordable Care Act subsidies which will lower health care premiums for millions of Americans, its passage became entirely imperative,” continued Clarke, a senior member of both the House Energy and Commerce Committee and House Committee on Homeland Security, where she serves as Chair of the Cybersecurity, Infrastructure Protection, and Innovation Subcommittee.

“Thanks to the hard work and ceaseless resolve of President Biden, my colleagues in Congress, and every individual who took seriously their duty to fight tooth and nail to better the lives of every American under our care, our pursuit of progress has never been stronger,” she said.

Clarke said “this monumental, generational investment in our nation’s future will lower prescription drug and energy costs, extend health coverage for millions of Americans, and deliver vital resources in our stand against the climate crisis, all while creating millions of well-paying American jobs for our nation’s most underserved and disadvantaged communities.”

The congresswoman said she was “proud and privileged” to have cast her vote to pass the Inflation Reduction Act, and looks forward to President Biden signing of it into law.

She said the Inflation Reduction Act funds several of her priorities in the 117th Congress, including: Electric Vehicles; Clean Energy; and Environmental Justice & Climate Justice.

US Vice President Kamala Harris, the daughter of a retired Jamaican economist, in a White House statement said the Inflation Reduction Act will lower the cost of prescription drugs for senior citizens and reduce health insurance premiums for 13 million Americans.

“We will make the largest investment in our nation’s history to address the climate crisis, creating good-paying, union jobs in wind, solar, and electric vehicle manufacturing,” she said. “We will lower energy bills for working families and support environmental justice.

“And, the legislation is fully paid for by finally ensuring the wealthiest corporations pay their fair share,” Harris added. “This is an historic achievement for our country that will directly benefit millions of Americans.

“Unfortunately, not a single Republican in Congress voted for the package,” she lamented. “Not a single Republican voted to lower the cost of prescription drugs, reduce health insurance premiums, make investments to address the climate crisis, tackle inflation, or require the wealthiest corporations to pay their fair share.”