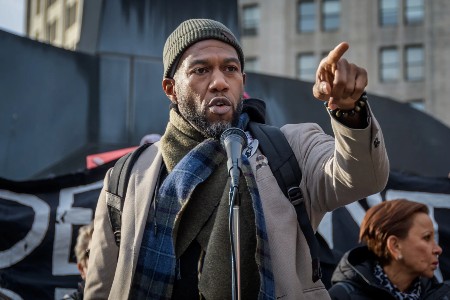 Getty Images photo.“This trial and the verdict it produced are clear and devastating representations of the way our country and our legal system view innocence and guilt, vigilantes and villains, race and the fight against racial injustice,” Williams, the son of Grenadian immigrants, told the Caribbean Media Corporation (CMC).

“A white 17-year-old killing protesters with a weapon of war is celebrated and acquitted,” added, Williams, who last week officially declared his candidacy for Governor of New York in next June’s Democratic Primary. “A Black 17-year-old walking the community with a bag of Skittles is criminalized and murdered.

“Across the country, we see people committed not to changing systems of injustice but using those systems to harm those who would object or protest against them,” he continued. “This verdict sets a new standard that will only encourage future Kyle Rittenhouses – some in the streets armed with weapons, some in government armed with oppression.

“Today, I’m praying for the families of Kyle Rittenhouse’s victims that they might someday find peace even in the face of this verdict, and continuing the work to change the systems that led to the result,” Williams said. “We can be demoralized, devastated by this verdict, but we cannot be deterred.”

“The ludicrous claim of self-defense is on par with the abhorrent behavior displayed by the prosecution and the judge,” the CBC said. “It is time for accountability. It is time for criminal justice reform, and it is beyond time for gun reform.”

“The gun violence crisis in America is a challenge to the conscience of our country,” Beatty said. “Democrats in the House have passed two bills aimed at strengthening the nation’s gun laws, including a bill that would require background checks on all gun sales and transfers. We also voted to approve legislation that would close the Charleston Loophole.

“We don’t need to wait another minute — or another hour — to take common-sense steps that will save lives in the future,” she added. “While today is filled with disappointment, we must continue to champion justice and gun reform, and condemn vigilantism so this never happens again.”

After the jury in Kenosha found Rittenhouse not guilty in the shooting deaths, sporadic protests broke out around America on Friday.

In New York, protesters shut down the Brooklyn Bridge; and, in Portland, Oregon, they pried open a jail gate, forcing the Multnomah County Sheriff’s Office to declare a riot.

“The crowd, which was described as hostile, launched urine, alcoholic beverages, water bottles and batteries at deputies during the event,” said the Sheriff’s Office in a statement on Saturday.