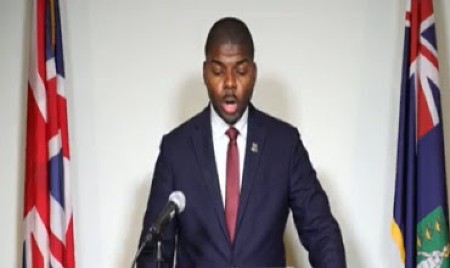 Premier Dr Natalio Wheatley addressing the nation (CMC Photo)“I’m pleased to report on behalf of the government of national unity that I have submitted a proposal to the UK Minister for the Overseas Territories, the Rt. Hon. Amanda Milling that sets out our approach to reform that presents a framework for the implementation under continued democratic governance,” Wheatley said in a national broadcast.

“It represents our commitment to good governance and strengthening our institutions and systems of government. We want to engender a new culture in the handling of the people’s business. I hope Minister Milling and the UK government will give due consideration to the proposal and not go down the path of direct rule,” he added.

A one-man Commission of Inquiry (COI) that examined allegations of corruption by public officials in the British Overseas Territory, outlined several recommendations including that British Virgin Islands government cease to exist in its current format for at least two years.

Governor John Rankin said that the sole Commissioner had recommended “a return to Ministerial Government and an elected House of Assembly as soon as practicable, with the Governor taking regular advice from the Advisory Council and others on the earliest practicable date on which such government can resume.

Rankin said overall, the Commissioner in his Report finds that the elected government, in successive administrations, “has sought to avoid good governance” and that “in terms of governance the people of the BVI have been served very badly in recent years and that almost everywhere the principles of good governance such as openness, transparency and the rule of law are ignored.

“He concludes that it is highly likely that serious dishonesty may have taken place across a broad range of government and that there is information that a substantial number of elected officials may be involved. He makes recommendations for further investigations and possible criminal prosecution in several areas.”

The Governor said that the COI made 45 specific recommendations on how to address each of the areas of concern that his report identifies.

Wheatley said that the new government has been working with Rankin, on addressing the governance concerns outlined in the COI.

Decisions by the United Kingdom government on the recommendations have yet to be made or communicated, but Premier Wheatley said he believes that the steps being taken by the new government will address the concerns in the COI Report.

One of the primary concern is the access to the ports of the territory, as Oleanvine Maynard, the Managing Director of the British Virgin Islands Ports Authority, was arrested, along with the former Premier Andrew Fahie, on charges of money laundering and drug trafficking that led to their arrest, and their arraignment scheduled for May 25.

“In the meantime, we are proceeding with some immediate reforms that we believe are in the public interest. In regard to the Ports Authority, I have been in communication with the chairman of the board, and he has indicated that he will tender his resignation,” Premier Wheatley said.

“The term of the remaining members will expire within days, and a new board of suitably qualified persons will be appointed. This decision was not taken lightly. However, given the remaining concerns about security at the ports after the arrest of managing director Mrs. Oleanvine Maynard and the details of her activities described in the affidavit filed in the US courts, we must refresh the board; so its integrity is beyond reproach.”

Maynard remains in her position despite her arrest and Premier Wheatley said that the legal and practical issues involved in her termination are under review. A new board will soon be appointed and tasked with hiring an interim managing director for the Ports Authority.

Regarding the security at the ports, Wheatley, the Governor-General and the Commissioner of Police are scheduled to meet and discuss the necessary measures to address the security concerns.

He said other changes include government appointments indicating that the same people should not be appointed to multiple statutory boards.

“I’ll be coming back to you soon to share the Government of National Unity’s approach to Statutory Boards because, in several cases, change is urgently needed in terms of their current composition and how we deal with appointments more generally.

It is not good practice to have the same person sitting on multiple statutory boards, and we will make the necessary changes in accordance with best practice. I’ll make an announcement shortly on a date and time when you present our comprehensive approach and invite your views,” said Premier Wheatley.