GEORGETOWN, Guyana – A High Court ruling that Vice President Bharrat Jagdeo had defamed a former government minister over statements he made concerning her acquisition of a plot of land, has been upheld following a split decision by the Full Court on Thursday. 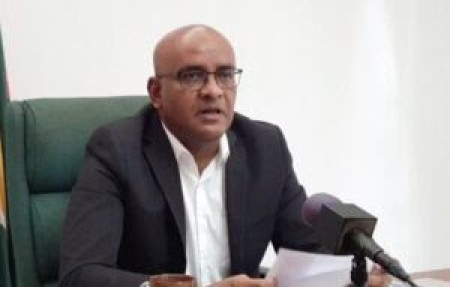 Bharrat JagdeoThe default appeal was granted against Jagdeo in favor of now opposition legislator, Annette Ferguson, following a defamation suit that she filed against him in 2020.

Jagdeo had moved to the Full Court in his bid to have the GUY$20 million (One Guyana dollar=US$0.004 cents) default judgment awarded to Ferguson for libel, thrown out. Jagdeo lost the libel case to Ferguson, after he failed to file a defense within 28 days of the filing of Ferguson’s Statement of Claim, which was done in January 2020.

Ferguson was initially seeking more than GUY$50 million in damages from Jagdeo for the statements he had made on December 18 and 19, 2019.

Ferguson had sued Jagdeo over the statements, which he made about her owning house lots. The statements were published in the Guyana Times newspaper which Ferguson also sued. The case against the newspaper is still to be determined.

Last October, acting Chief Justice Roxane George, and High Court Judge Priya Sewnarine-Beharry, comprising the Full Court, heard arguments in the appeal filed by Jagdeo against Justice Kurtzious’s ruling that had been handed down on March 11, 2021.

However, the Full Court was split, with the Chief Justice ruling that the default judgement should not be vacated, while Justice Sewnarine-Beharry ruled that it should be. As a result of the split opinion, Justice Kurtzious’s decision remains in effect.

Media reports said that Jagdeo’s legal team intends to further challenging the default judgement and has since been granted an eight-week stay of execution by the Full Court.

This is the second time Jagdeo has been unsuccessful in his attempt to overturn the default judgement. His lawyers had asked Justice Kurtzious to overturn her own judgement, but the application had been dismissed after the Judge had found that Jagdeo’s excuse for the non-filing of the defense was unreasonable, and that the statements he had made about Ferguson were slanderous.

In explaining the reason for the non-filing of the defense, Jagdeo lawyers had argued that their client’s then lawyer, Attorney General Anil Nandlall, SC, had been preoccupied with the 2020 National Elections, and the constraints brought on by the coronavirus (COVID-19) COVID-19 pandemic had led to him inadvertently failing to file the defense, though it was drafted.