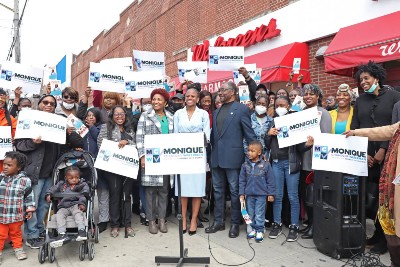 Diplomat Nick Perry endorsed Monique Chandler-Waterman at her campaign launching ceremony (Photo credit: Jack Desa)Perry is expected to take up his assignment in Kingston soon, becoming the first Jamaican national to hold the position of US Ambassador to Jamaica.

He endorsed Chandler-Waterman, the daughter of Barbadian and Jamaican immigrants, at her campaign launching ceremony in the heart of the Caribbean community in Brooklyn.

“I’m proud to endorse Monique to be the next Assemblymember, and I know the district will be in good hands. She is a natural leader in every sense of the word, and her roots go deep in this community.

“Monique is the best of us, and she will fight to make sure everyone has access to quality public schools, affordable housing and community-based health care,” said the veteran politician.

Chandler-Waterman said she was “so honored” to receive Perry’s endorsement, adding “I’m running to make sure my friends and neighbors in East Flatbush, Canarsie and Brownsville have their fair share of safe streets, good schools and affordable housing.

“Monique knows the struggles of a working parent and what it means to advocate for your community without fear,” said Narcisse, the newly-elected representative for the 46th Council District in Brooklyn. “I’m proud to stand by her side in this race.”

Williams, who represents the 59th Assembly District in Brooklyn, said “from her years of work on anti-gun violence efforts, and addressing food insecurity across all of our communities, Monique has been doing the work.

“When you call on Monique, Monique is there. She has lived her life and raised her family with the belief that community comes first. And that is why I am proud to support Monique Chandler-Waterman for New York State Assembly in the 58th District,” she added.