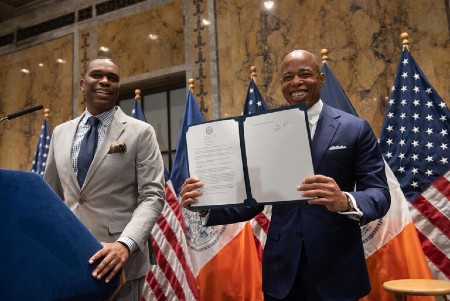 He is the lead pastor of Mt. Zion Church of God 7th Day in Brooklyn, New York and founding president of two Brooklyn-based nonprofit organizations, the 67th Police Precinct Clergy Council Inc., otherwise known as “The God Squad”, and the Brooklyn Center for Quality Life.

In the newly-created position, Adams said Monrose will serve as a conduit between city government, the faith-based community throughout New York City and nonprofit organizations.

The mayor said OFCP will seek to improve the welfare of all New Yorkers and will be housed within the Mayor’s Community Affairs Unit (CAU).

“Our faith community has gone above and beyond the past two years, working tirelessly to keep our people fed, safe, and healthy, mentally and physically,” said Mayor Adams. “It’s past time that the city recognized the critical role they play in uplifting people across our city.

“I have had the privilege of working alongside Pastor Monrose for several years and have gotten to witness firsthand his talent for building bridges between diverse communities,” he added. “I thank him for joining our administration in this newly-created office and look forward to working with faith leaders across our city to ‘Get Stuff Done.’”

“The faith-based community is a fundamental partner in the work that our office does every day,” said CAU Commissioner Fred Kreizman. “I’m thrilled to be working with Pastor Monrose in order to continue this partnership and work together towards our shared goals.”

Monrose said he was “humbled to join the administration as head of OFCP.

“Mayor Adams has always recognized the important work faith leaders across our city do to help the most vulnerable New Yorkers, and this new office will engage these communities to address issues affecting our city, from gun violence to hate crimes, and uplift people across the five boroughs,” he added.

Rabbi Joseph Potasnik, executive vice president, New York Board of Rabbis, said, “The Office of Faith-Based and Community Partnerships reminds us that, though we may travel on separate paths to our respective houses of worship, there comes a time when we of many faiths must walk together as one family with strength and support for one another.

“We are a divided country but spiritually we are a united community,” he said.