WASHINGTON,  DC - Minister of Culture Gender Entertainment and Sports, Hon, Olivia Grange, says if Jamaica is to realize its dreams, of being “A land of Peace and Love,” we must find a way to instill HOPE in our young people. 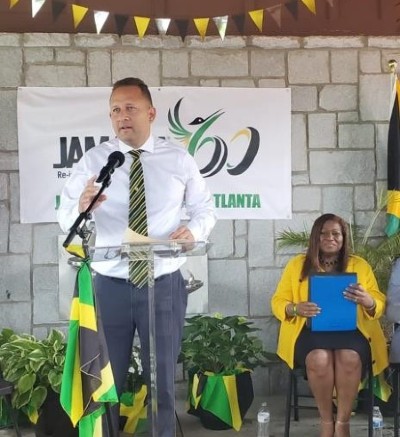 Jamaica’s Consul General in Miami Mr., Oliver Mair delivering the message from Minister of Culture, Gender, Entertainment and Sports The Hon. Olivia Grange at the Atlanta launch of Jamaica-60 celebration activities. Seated is Jamaica’s honorary consul in Atlanta Dr. Elaine Bryan.In a message to launch the “Jamaica-60” celebrations in Atlanta Georgia on Sunday, The Minister, in a speech delivered by Jamaica’s Consul General in Miami Mr. Oliver Mair, said “truth be told, if we are to realize this dream we must find a way to instill HOPE in our young people. Too many have literally lost hope; Lost hope in themselves; Lost hope in the family and Lost hope in the country,” she lamented.

“Throughout this year, as we celebrate Jamaica 60, at home and across the Jamaican Diaspora, I implore all Jamaicans to pause to reflect on the foundation laid by those who came before us,” she said.

“None other than of our most revered sons Bob Marley, in “No woman nuh cry” amidst his assurance that everything is gonna be alright, also reminded us that “in this bright future you can’t forget your past,” Minister Grange reminded.

She said this was “enough of a reminder that as we observe this Diamond Jubilee, we must remember the sacrifices of our ancestors who were forcibly brought to these shores and endured much pain and humiliation.

In chronicling Jamaica’s achievements over the years, Minister Grange pointed to Jamaica’s music which “has been an inspiration and a balm for the oppressed both locally and abroad, spanning the world. Many distressed people across the globe took comfort in the words of Jamaican songs and continue to do so.”

“So influential is our music that in 2018, Reggae was designated by UNESCO as a part of the intangible cultural heritage of humanity. Bob Marley’s One Love was named by the BBC as the Song of the Millennium in 2000 and has become the world anthem of unity and solidarity,” she noted.

She pointed to the island’s achievements in sports, where “our accomplishments have been legendary; from the days of Arthur Wint and Herb McKenley who emerged victorious in the 1948 Olympics, to our younger cohort of athletes including Usain Bolt, Elaine Thompson Herah and Shelly Ann Frazer Pryce.

The culture minister called on members of the Jamaican Diaspora in Atlanta to join hands in “Re-igniting Our Nation for Greatness as we approach our Diamond Jubilee.

“Re-Igniting Our Nation for Greatness means we must transform our system of education so that our children receive the highest standards of education and training to successfully compete in the 21st Century Global Economy and beyond."

“Re-Igniting Our Nation for Greatness means we recognize that we are Out of Many One People, a nation of greatness."

“Re-Igniting Our Nation For Greatness means recognizing the strength, commitment and achievements of our Diaspora. I am pleased to announce that there will be an extensive program of activities during the Diamond Jubilee celebrations, which will culminate on August 6, 2023. We are focusing on Legacy Projects, in an effort to ensure that there are lasting structures to truly commemorate this significant milestone,” she concluded.