KINGSTON, Jamaica – Justice Minister, Delroy Chuck, is encouraging Jamaicans to break the culture of silence and speak out against wrong doing in an effort to solve crime on the island. 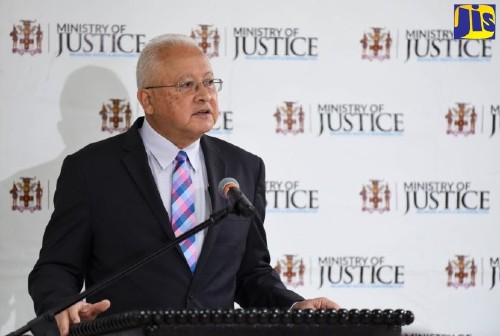 Justice Minister Delroy Chuck. (JIS Photo)“Jamaicans, if we are going to solve the problems of indiscipline, lawlessness, corruption, criminality and all the problems that plague this country, every single Jamaican must take a stand and speak up,” he said.

Addressing the National Public Education Day Symposium on Thursday, Chuck said that evidence is critical in denouncing criminal and illicit activities that occur in the society.

“If you see something happening, you must have the courage to be able not only to give the information, but you must be prepared to provide the evidence because the Court cannot just work on intelligence and information, the court works with evidence.”

He said wrongdoers must be exposed and that every single Jamaican must expose all those who are creating the indiscipline and the lawlessness on the nation’s roads.

Chuck said a collaborative approach among the Ministries of Justice, National Security and the courts is being undertaken to ensure that there are greater consequences for indiscipline on the nation’s roads.

“I can tell you that the Ministry of National Security, the courts and myself will be working very hard to make sure that when the police ticket people they conform. They must pay their fines, and those who should not be on the road may well find themselves being taken off the roads because they have so many tickets.”

Chuck also urged Jamaicans to use alternative dispute resolution (ADR) methods to resolve conflicts more peacefully and assist in reducing the number of cases that come before the courts.

“Far too many cases are coming to the courts. We have over 70,000 cases that come to the courts every year, so the burden on the courts is really significant. If the parties could just get together and resolve them, they will find out that using mediation, using counselling… many of the problems can be resolved before the need for them to come to court,” he said.

He said approximately 90 percent of cases in the parish courts are dealt with in a year and that the ministry would like to see definite timelines for various processes in the courts.

“The Chief Justice and myself, we have had many discussions… as to how we can put in timelines, so that we know that any matter can be dealt with within a fixed timeline.

“The truth is, there are some matters that can be dealt with in a matter of weeks or months; they don’t have to drag on for years. Take matters like divorces and probates. If the attorneys just present the documents correctly, they can be completed within weeks,” he said, calling on all stakeholders to play their part for efficiency within the courts.

“Unless everyone plays his or her part to make sure they get it right, then the courts will not be able to dispose of the matters in a timely manner,” he added.