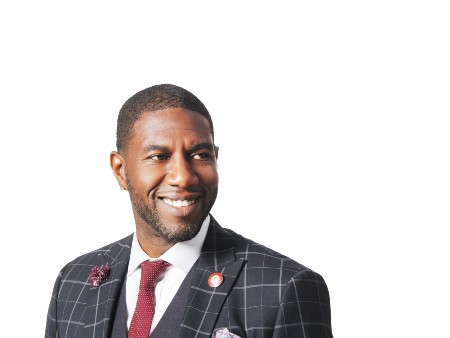 Jumaane Williams (Photo courtesy of Jumaane for Governor of NY)“Still reeling from the damage that the Supreme Court has done to New Yorkers’ safety this week, it is at once good to see this legislation, which will help to save lives, becomes law, and frustrating and infuriating that it has taken this many years, this much loss, to make even this small amount of progress in our federal gun laws,” Williams, the son of Grenadian immigrants, told the Caribbean Media Corporation (CMC).

“We have to be clear that this is a step, a symbol that we must push past inaction, not a substitute,” added Williams, a candidate for Governor of New York in Tuesday’s Democratic Primary. “Especially in the wake of these disastrous court decisions, it’s clear that we need to do much more on a city and state level to combat gun violence — both the supply and the demand.

“Each of these aspects must immediately be addressed in a special session of the state legislature, and we must continue to demand more from DC (District of Columbia) — real, sweeping, broadly popular reforms have been left on the Capitol floor, and must be taken up to truly meet this epidemic of gun violence,” he continued.

In signing S.2938, the Bipartisan Safer Communities Act, into law on Saturday, Biden thanked the leaders and members of the US House of Representatives and the US Senate for “working together to get this done.

“I especially want to thank the families that Jill (First Lady Dr. Jill Biden) and I — many of whom we sat with for hours on end across the country,” said Biden in a speech from the Roosevelt Room in the White House,” he said. “So many we’ve gotten to know who lost their souls and — to an epidemic of gun violence.  They lost their child, their husband, their wife.  Nothing is going to fill that void in their hearts, but they led the way so other families will not have the experience and the pain and trauma that they had to live through.

“From Columbine to Sandy Hook, to Charleston, Orlando, Las Vegas, Parkland, El Paso, Atlanta, Buffalo, Uvalde, and for the shootings that happen every day in the streets that are mass shootings — and we don’t even hear about them, the number of people killed every day in the streets — their message to us was: ‘Do something.’  How many times we heard that?  ‘Just do something.’  For God’s sake, just do something,” Biden added.

“Well, today, we did,” he continued. “While this bill doesn’t do everything I want, it does include actions I’ve long called for that are going to save lives.  It funds crisis intervention, including red-flag laws.  It keeps guns out of the hands of people who are a danger to themselves and to others.  And it finally closes what is known as the ‘boyfriend loophole’. So, if you assault your boyfriend or girlfriend, you can’t buy a gun or own a gun.”

“Tonight, the United States Senate is doing something many believed was impossible even a few weeks ago: we are passing the first significant gun safety bill in nearly 30 years,” said Schumer speaking on the Senate floor. “The gun safety bill we are passing tonight can be described with three adjectives: bipartisan, commonsense, lifesaving.”

“As the author of the Brady Bill from 1994 – the last major legislative effort to fight gun violence in Congress, Schumer said he was “pleased that this moment has finally come, and that we’re finally taking meaningful action to keep our communities safe.,” he said.