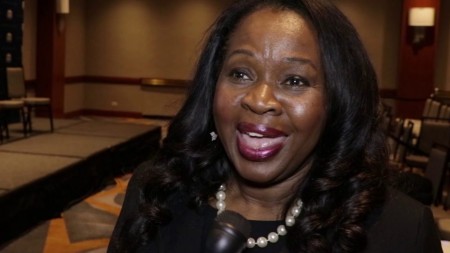 Justice Sylvia Hinds-Radix (CMC Photo)The Council created history in its 51-0 vote to confirm Barbadian Hinds-Radix as the first ever Caribbean-born woman to serve in that capacity.

As Corporation Counsel, Hinds-Radix, whose last position was Associate Justice of the New York State Appellate Division, Second Department, will lead the City’s Law Department, which is primarily responsible for providing legal representation to the City, the Mayor, other elected officials, and City agencies in all affirmative and defensive civil litigation.

Justice Hinds-Radix, who was appointed Associate Justice of the New York State Appellate Division, Second Department in 2012, conducted the Mayor’s swearing-in ceremony, on January 2, this year at the Times Square New Year’s Celebration in midtown Manhattan.

Adams applauded the City Council for confirming Justice Hinds-Radix, as well as Jocelyn Strauber as the commissioner of the Department of Investigation (DOI).

“I thank the Council for recognizing the tremendous talent and experience Justice Hinds-Radix and Ms. Strauber will bring to their respective roles by voting to confirm them to lead the Law Department and the Department of Investigation today,” said Adams in a statement.

“I made a commitment that our administration will be guided by the values of accountability, transparency and fidelity to the highest ethical standards. I look forward to working with these two individuals to ensure we live up to that commitment, and ‘Get Stuff Done’ on behalf of all New Yorkers.”

In appointing Justice Hinds-Radix in January, Adams, the second Black man to become Mayor of New York City after the late David N. Dinkins, said the jurist “has not only the brilliant legal mind but also the emotional intelligence needed to lead the department as our next Corporation Counsel.

“I congratulate her on her history-making appointment,” Adams said.

Hinds-Radix – an eminent jurist, who, in 2020, was designated a member of the New York State Constitutional Bench – was elated with her confirmation.

“I’m very excited, and I’m thankful that I was nominated by the Mayor and confirmed by the City Council,” Justice Hinds-Radix told the Caribbean Media Corporation (CMC).

“I look forward to serving as Corporation Counsel and serving the City of New York with integrity and fairness to ensure that this City is a fair and just City for all New Yorkers.

“I have been on the bench for 20 years. I had the opportunity to serve as a judge, but I’m looking forward to this new role and to deal with issues of policy and law. I’ve also done public service, and I look forward to continue serving in that role.”

Prior to her appointment to the Appellate Division, Justice Hinds-Radix served as Administrative Judge for Civil Matters in the Second Judicial District for three and a half years.

Hinds-Radix, the first and current president of the Brooklyn-based Caribbean American Lawyers Association (CALA), was elected to the Supreme Court, Kings County (Brooklyn) in November of 2004, and served as a New York City Civil Court Judge, from 2002 through 2004, spending her first year in the Criminal Court of Kings County.

She began her legal career at District Council (DC) 37 Municipal Employees Legal Services, where she was a supervising attorney. DC 37 is the largest union representing municipal workers in New York City.