Jamaicans Encouraged to Comment on Bail Bill by November 30th

KINGSTON, Jamaica – Jamaicans are being encouraged to submit written submissions on the Bail Bill by Wednesday, November 30 with the Minister of Legal and Constitutional Affairs, Marlene Malahoo Forte, saying that rewriting the legislation has resulted in the preservation of the established common law rules as well as some modifications. 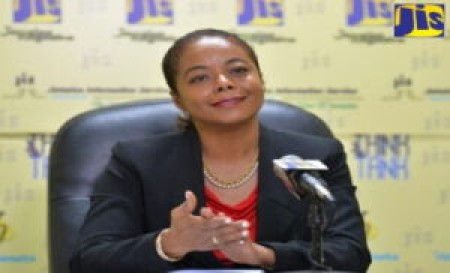 Marlene Malahoo Forte (Photo courtesy of JIS)“Even where we have preserved existing conditions, it’s going to be very important that you read fully and carefully the new law. When it comes to interpreting the law, the Court will look at what is written and a single word can make a difference,” she told a JIS ‘Think Tank’.

“Do not take it for granted that you are familiar with the provisions of bail at common law or the Jamaican jurisdiction,” she added.

The Bill is now before a Joint Select Committee of both Houses of Parliament, for review. Committee members, during the review process, will have an opportunity to ask questions and make suggestions for improvements.

Malahoo Forte said Jamaicans are being encouraged to carefully read the Bill, in spite of familiarity.

“What has changed with the new legislation is that we no longer have to look at individuals, because up to 2014 we really could only prosecute the individual, irrespective of what other persons may have done either in the background or foreground.

“You could only move against the individual in that respect. Now, this new Act allows us to move against groups and you have seen that we have brought certain groups to trial,” Taylor told the Ministry of Education and Youth’s Anti-Gang Week Townhall meeting.

He told the audience that the law, passed in 2014 and amended in 2021, spreads a broad net to facilitate the capture of all persons complicit in criminal activities.

The law goes further to clarify that individuals participating in activities that render any benefit to a gang also contravene the law.

“It speaks about providing a benefit to a criminal organization. These are the gun bags; if you carry the guns for the criminal organisation to hide or to ‘lock’, you have provided a benefit.

The Jamaica Constabulary Force (JCF) data shows that gang violence contributes to an estimated 80 percent of murders in the country.

Anti-Gang Week, which ends on Saturday, is being held under the theme ‘Leggo Di Gang, Lift Up Jamaica’.