WASHINGTON, DC – United States President Joseph Biden has bestowed the Presidential Medal of Freedom honor on a Jamaican nurse, who was the first person in the United States to have been vaccinated against the COVID-19 pandemic that has killed and infected millions of Americans since 2020. 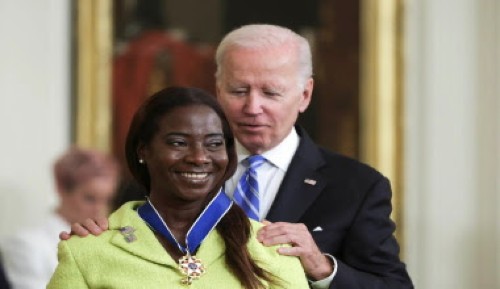 “If there’s any angels in Heaven, they’re all nurses, male and female,” said the US President in conferring the Medal on Lindsay in the East Room of the White House, adding that Lindsay’s vaccination card and badge are part of a Smithsonian exhibit on the coronavirus pandemic.

Lindsay was among 17 individuals who received the Presidential Medal of Freedom, the first recipients of America’s highest civilian honor since Biden assumed office.

Among other recipients of the Presidential Medal of Freedom were American gymnast Simone Biles; former US Congresswoman Gabby Giffords, a survivor of gun violence, who co-founded Giffords, a non-profit organization dedicated to gun violence prevention; John McCain (posthumously), who died in 2018 and had represented Arizona for decades in the US House of Representatives and the US Senate; and Academy Award-winning actor Denzel Washington, who was unable to attend the ceremony because he tested positive for COVID-19.

US Vice President Kamala Harris, the daughter of a retired Jamaican-born economist, and second gentleman Doug Emhoff were also among attendees at the White House ceremony.

“The Fourth of July week reminds us what brought us together long ago, and still binds us – binds us at our best, what we strive for,” said Biden, adding “we, the people, doing what we can to ensure that the idea of America, the cause of freedom, shines like the sun to light up the future of the world.

“That’s the soul of our nation That’s who we are as Americans.”

In announcing the Award, the White House said in a statement that the Presidential Medal of Freedom is “presented to individuals who have made exemplary contributions to the prosperity, values or security of the United States, world peace, or other significant societal, public or private endeavors.

“President Biden has long said that America can be defined by one word: possibilities,” it said, adding “these 17 Americans demonstrate the power of possibilities and embody the soul of the nation – hard work, perseverance and faith.

“They have overcome significant obstacles to achieve impressive accomplishments in the arts and sciences, dedicated their lives to advocating for the most vulnerable among us, and acted with bravery to drive change in their communities – and across the world – while blazing trails for generations to come,” the statement added.

In February, United Nations General Assembly President Abdulla Shahid met with Lindsay, at UN headquarters in New York, a day before of a high-level vaccines event at which Lindsay spoke about the importance of vaccine equity.

Shahid said he was convening the event to galvanize momentum for universal vaccination.

Lindsay, an Intensive Care Unit (ICU) nurse at Long Island Jewish Medical Center in Queens, New York, said it was “just amazing” that she, “this young lady from Jamaica, would one day end up in the General Assembly.”

Lindsay, who holds a doctorate in health sciences, received her first COVID vaccine on December 14, 2020, following emergency use authorization of the shots.