KINGSTON, Jamaica – Jamaica's government has said that nationals studying in Ukraine have turned down an offer to assist them to return home as the Russia appears to be sending in its troops to invade the European country. 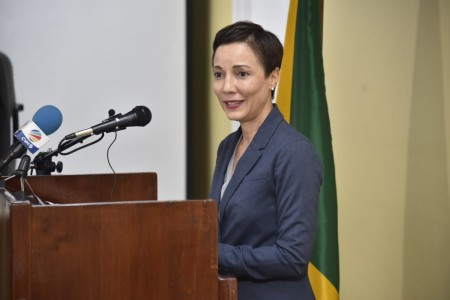 “Although seven students had requested assistance, ultimately they decided not to go this route,” she said, adding “we understand that while some students are making private arrangements to travel to other cities in the region until the situation in Ukraine improves, others are still cautiously monitoring the situation.

“We are aware of eight students who have left thus far, with an additional five travelling from Ukraine over the course of this week,” the Foreign Affairs Minister said.

She said that the government has noted the cancellation of flights between Ukraine and Germany, which increases the complexity of travel, should students still choose to return to Jamaica.

“We have shared the options available to them, for example through Turkey, and have highlighted our concern that travel may become even more challenging as events unfold and would even become impossible should Ukraine’s airspace be closed entirely. Our message to them has been that they need to take immediate action if they intend to leave,” said Johnson Smith.

She said the Jamaica government remains hopeful that diplomatic efforts will yield a de-escalation of tensions, but notes with concern the intensification of tensions in the region.

In the meantime, she said the Ministry remains actively engaged with the students as well as with their family members in Jamaica.

Ukraine announced plans Wednesday to declare a state of emergency, as it prepares to repel an expected Russian invasion.

The 30-day state of emergency, subject to approval by parliament, would impose curfews and restrict mass gatherings in certain regions “if necessary” to confront increased Russian aggression, the chief of Ukraine’s National Security and Defense Council said.

Ukraine has also issued a call-up of reservists as the United States and several countries including United Kingdom, Germany, Japan and Canada announced a series of economic sanctions against Moscow President Putin’s decision to recognise the separatist regions of eastern Ukraine.

Putin has since said he would send Russian troops into the area as peacekeeping forces,.