KINGSTON, Jamaica – The Jamaica government says it will provide J$25,000 (One Jamaica dollar=US$0.008 cents) in vouchers to operators of public passenger vehicles, including route taxi operators and contract carriage operators, to cushion the rising cost of fuel. 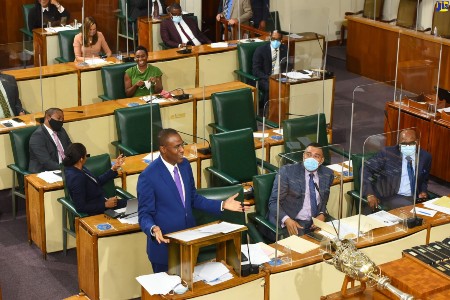 Oil prices have been increasing since Russia launched a military invasion of Ukraine, resulting in many Caribbean countries having to face increased prices for petroleum products.

Finance and the Public Service, Dr.  Nigel Clarke, ending the debate on the 2022-23 national budget on Tuesday, told legislators that the voucher program will begin towards the latter half of April and will be administered by the Transport Authority under the guidance of the Minister of Transport and Mining,  Audley Shaw.

He said in addition, the government will make available J$200 million in revolving loan financing for public passenger vehicle operators, which will be available through Microcredit and Approved Financial Institutions, by way of the Development Bank of Jamaica.

He told Parliament that the government will increase the allocation towards transportation assistance for students on the Program of Advancement Through Health and Education (PATH) by 40 per cent, costing an additional J$152 million.

These initiatives are part of the government’s overall social assistance support of J$3.7 billion.

Clarke also announced that the Ministry of Finance and the Public Service (MOFPS) has obtained Cabinet’s approval to exempt lithium-ion batteries from General Consumption Tax (GCT) and that the new measure will be implemented in the first quarter of this financial year, which begins on April 1.

He said that in keeping with the thrust of the National Energy Policy, the MOFPS has been updating its strategy to encourage the use of energy-efficient technologies.

“From as early as 2013, the MOFPS incentivized the use of selected energy-efficient technologies by suspending the Common External Tariff (CET) and granting GCT exemption on the importation of such items.

“We recognize that lithium-ion batteries are rechargeable batteries that use lithium-ions as the primary component of its electrolyte, commonly used for portable electronics and electric vehicles. Their popularity has been growing as an energy-storage technology, which should help to reduce the cost associated with the generation of electricity,” he added.

Clarke said the Ministry has already provided relief of the CET on such batteries and now believes the time is right to exempt these batteries from GCT.