Jamaica to Pay 20% of Electricity Bill for Low-Income Households

KINGSTON, Jamaica – More than 450,000 low- and middle-income households, consuming up to 200 kilowatt hours (kWh) of electricity per month, will receive a 20 percent contribution towards their bill payments over the next four months, Minister of Finance and the Public Service Dr. Nigel Clarke has announced. 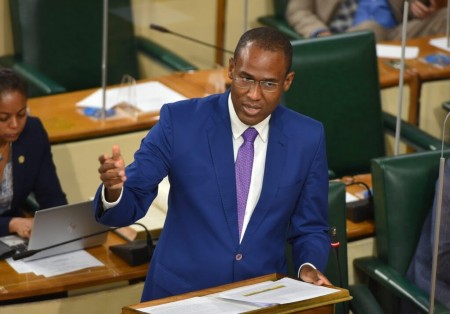 Minister of Finance and the Public Service Dr. Nigel Clarke. (PHOTO: RUDRANATH FRASER/JIS)The initiative which is being offered under the Government’s proposed We CARE Energy Co-Pay Program, is expected to largely benefit persons earning smaller incomes, including vendors, security guards, housekeepers, household workers, bartenders, waiters, handymen, many occupations in the informal economy and hard-working Jamaicans on minimum wage or just above.

Minister Clarke said the program, expected to cost approximately JMD$2 billion (USD$13 million), is being implemented as a temporary intervention to cushion the impact of higher electricity prices on the most vulnerable.

These increases have been sparked by hikes in global oil prices, largely fueled by the conflict between Ukraine and Russia.

Consequently, Dr. Clarke said the intervention, which forms part of an overall JMD$3.7-billion (USD$24-million) package of social assistance support, will be extended to prepaid and postpaid Jamaica Public Service Company (JPS) customers between April and July.

Dr. Clarke noted that approximately 457,786 largely low-income households, representing 81 percent of the JPS’s retail base of 563,451, will benefit from the intervention.

He indicated that the target beneficiaries will also include some “middle” bracket customers who, “while not particularly associated with lower incomes, [are] not associated with higher income either”.

The Minister also advised that prepaid JPS customers who pay in advance for small amounts of electricity at a time will receive bonus credit from the government representing, 20 percent of the top-up sum purchased.

“We are concerned that [for] those on lower incomes… more and more of their income is consumed by electricity consumption… at this time. So, when we construct social-assistance policies to respond to times like these, we wish to target lower income groups.

It is only morally right that the proceeds of social-assistance resources go to these persons first,” he maintained.

Meanwhile, Dr. Clarke informed the House that the Government, through the Jamaica Social Investment Fund (JSIF), has been regularizing communities where unauthorized electricity was “once the norm”.

He said these communities all have new JPS customers on the prepaid modality.