WASHINGTON D.C. - Jamaica’s ambassador to the United States, Her Excellency Audrey Marks, says the island’s relationship with the United States under the Biden Harris administration remains strong and is emphasizing that the Government of Jamaica continues to greatly value its enduring partnership with the US. 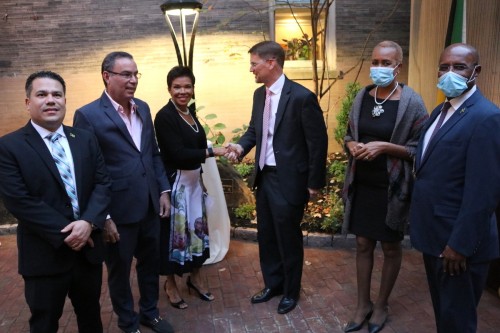 Jamaica’s Ambassador to the United States Her Excellency Audrey Marks greets the Assistant Secretary of State for the Caribbean, Mr. Mark Wells as he arrives at the Embassy of Jamaica to attend a reception marking the conclusion of consultations on ICT, cyber security, and energy between the governments of Jamaica and the United States on Friday at the Embassy of Jamaica in Washington DC. On hand to greet the Assistant Secretary are Minister without Portfolio in the Ministry of National Security Senator Matthew Samuda; Delegation head, Science, Energy and Technology Minister Hon. Daryl Vaz; Education and Information Minister Hon. Faval Williams; and Minister without Portfolio in the Ministry of Economic Growth and Job Creation, Senator Aubyn Hill. (Derrick Scott Photo)She was on Friday addressing a reception at the Embassy of Jamaica, to mark the conclusion of high-level consultations on information and communications technology (ICT), cyber security and energy in Arizona and Washington DC.

“It is a distinct pleasure to host my Jamaican and American colleagues today at this reception, as it is a fitting end to a productive week of engagements between the Government of Jamaica and our partners in the US Government, private sector, and academia,” Ambassador Marks observed.

“This week-long slate of consultations marks yet another positive development in Jamaica’s policy focus on emerging stronger from the Covid19 pandemic. This strategic involvement of the USA is also symbolic of its strong commitment to continue its longstanding support of Jamaica’s development efforts,” she declared.

The Jamaican twelve-person high level delegation was led by the Minister of Science, Energy and Technology, Daryl Vaz and also included Minister of Education and Information Faval Williams; Minister without Portfolio in the Ministry of Economic Growth and Job Creation, Senator Aubyn Hill, Minister without Portfolio in the Ministry of National Security Senator Matthew Samuda; as well as the head of the Planning Institute of Jamaica, PIOJ, Dr. Wayne Henry.

Ambassador Marks pointed out that the diverse nature of Jamaica’s delegation to the consultations was indicative of the importance of information and communications technology (ICT), cybersecurity and to the Government of Jamaica, noting that “we can achieve so much when we work together to address shared challenges in a spirit of friendship.”

“Even before the onset of the coronavirus pandemic, the Government of Jamaica has been working assiduously to strengthen its digital offerings and capabilities. We have had challenges, but we are cognizant of the opportunities that lie in a digital economy,” she observed.

Jamaica’s envoy to the United States emphasized that “advances in workforce development, virtual learning and teaching, and keeping our digital assets secure are global concerns. If these topics are addressed in a purposeful manner, Jamaica will build back stronger and more resilient while moving closer to the realization of our Vision 2030 aspirations,” she said.

She thanked the team from the U.S. Department of State for their invitation to the Government of Jamaica and in particular, Mr. Alexander Sokoloff from the Embassy in Kingston, as part of an ongoing collaboration on information technology, cybersecurity, and energy.

Deputy Assistant Secretary of State in charge of the Caribbean Mark Wells, in responding said that the Biden-Harris administration was very focused on deepening the relationship between Jamaica and the US because it is very important to do so.”

He went on to point to the staging of the High Level consultations on digital technology as an example, noting that “It is important to have a government and a Cabinet that is thinking long term about the challenges that face our people. In addition, you have an embassy that is thinking about how we can be of assistance to the Caribbean and so we discuss issues such as: the digital economy; cyber security, digital education, energy, and of course climate change.”

Deputy Assistant Secretary Wells described the just concluded series of engagements between the US Government and Jamaica as very productive. “This is for us in the State Department and our agencies what diplomacy is all about.”

He noted that the Biden-Harris administration was focused on expanding and deepening the relationship with Jamaica and the wider Caribbean and emphasized that he was looking forward to being personally very involved in this thrust and as such will be visiting Jamaica in the near future.

In his remarks, head of Jamaica’s delegation to the consultations, Minister Daryl Vaz said the trip was a study tour and is looking at a number of joint initiatives including the possibility of the establishment of a center of excellence in cyber security in Jamaica, to support the region.

He shared that the meetings also focused on how the US could assist Jamaica with it’s planned Broadband infrastructure. He said he and his delegation were very pleased with the discussions and where they could lead. He said the visit to the Arizona State University was an eye-opener and Jamaica stands to benefit from the engagement. He pointed out that the meetings in Washington included funding agencies which would partner with Jamaica in relation to funding various projects.

Minister Vaz said the next phase of this initiative was for these agencies to visit Jamaica to form working groups to look at all the possibilities that were presented and decide what would be the priority of the Government of Jamaica in these areas cyber security, energy and ICT.