KINGSTON, Jamaica – The Jamaica government says it will be moving with haste and alacrity towards transforming the island into a republic. 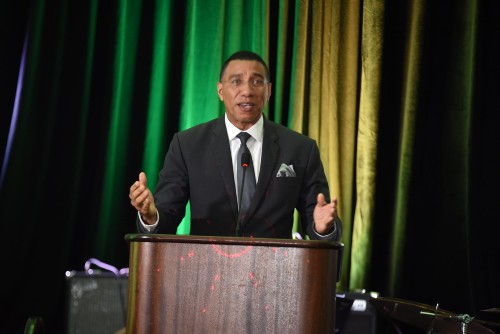 Prime Minister, the Most Hon. Andrew Holness, speaks at Tourism Minister, Hon. Edmund Bartlett’s 25th Anniversary Scholarship Programme, at the Half Moon Hotel, Montego Bay, on January 14. (via JIS)“It is time that Jamaica become a republic. For us, the process is not simple, and we have known this from we started on this journey, and we are making sure that we check every box as we move deliberately in that regard,” Prime Minister Andrew Holness said, noting that while the process is something he inherited, he never expected it “to be a straight line”.

“Jamaica must become a Republic,” Holness said, adding that whatever obstacles the process might encounter, his administration will be in for the long haul and will do whatever it takes.

Last week, Malahoo Forte expressed the government’s “disappointment” at the failure to name the high level committee on constitutional reform, blaming the main opposition People’s National Party (PNP) for holding up the start of the process of Jamaica’s move towards becoming a republican state.

Malahoo Forte told Parliament that while a referendum is necessary for Jamaica to move away from having the British monarch as its head of state, the process must involve cross aisle collaboration as well as consultation and collaboration with ordinary Jamaicans.

She said it was the intention of the government to name the members of the high-level committee last Tuesday, “but I regret to advise the people of Jamaica that we are not able to do so….

Opposition Leader Mark Golding defended the opposition’s position on the situation, noting that the circumstances were not that simple as Malahoo Forte had only recently replied to a letter which he wrote to her in June 2022 requesting information on the intended amendments to the Jamaica Constitution and concerns regarding the Privy Council remaining as Jamaica’s final appellate court.

While Jamaica is a signatory to the Trinidad-based Caribbean Court of Justice (CCJ) as a replacement for the London-based Privy Council, the island has only signed on to the Original Jurisdiction of the Court that also acts as an international tribunal interpreting the Revised Treaty of Chaguaramas that governs the regional integration movement CARICOM. It is not a signatory to the CCJ’s Appellate Jurisdiction.

Jamaica gained independence from the United Kingdom on 6 August 1962.