KINGSTON, Jamaica – Jamaica’s Prime Minister Andrew Holness has defended the decision of his government to nominate Foreign Affairs and Foreign Trade Minister, Kamina Johnson Smith, for the position of Commonwealth Secretary-General, even as regional leaders gear up to meet on Wednesday to discuss the controversy that has erupted over Kingston’s position. 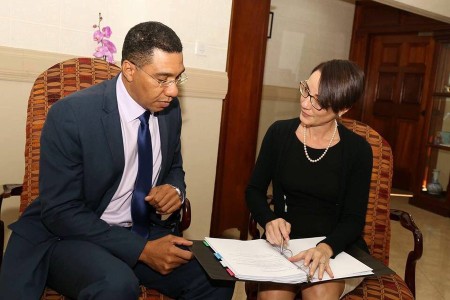 Prime Minister Andrew Holness and Foreign Affairs and Foreign Trade Minister, Kamina Johnson Smith discuss legislation. (via @AndrewHoldnessJM on Twitter)Caribbean Community (CARICOM) leaders at their inter-sessional summit in Belize last month had expressed their overwhelming support for the re-election of Baroness Patricia Scotland as Secretary-General of The Commonwealth”.

The Dominica-born Scotland is the second Secretary-General from the Caribbean and the first woman to hold the post.

Antigua and Barbuda Prime Minister, Gaston Browne, has described as a “monumental error” Jamaica’s decision to nominate Johnson-Smith, while Dominica’s Prime Minister Roosevelt Skerrit in a letter to all 54 members of the Commonwealth had urged support for her re-election.

But speaking in the Parliament on Tuesday evening, Prime Minister Holness said that towards the latter part of the initial term of the current secretary-general, several countries, including Jamaica, were approached regarding the possibility of nominating a candidate for the post.

“Jamaica took the view at that time that whatever the issues that gave impetus to members seeking alternative candidates, the first order of response would be to resolve, with dialogue, to avoid disruption,” said Holness.

Holness said that it was clear that the impetus to seek an alternative candidate strongly persists, noting that since then, Kenya nominated a candidate before withdrawing, with the tiny territory of Tuvalu, population less than 12,000, formally launching its candidature in London on Tuesday.

“It is quite possible that others could emerge,” Holness said, adding “we can conclude that the first term of the incumbent has left room for challenge”.

Holness said that Jamaica has had, in recent weeks, to consider the state of affairs and future of the Commonwealth, “in conjunction with the incredibly strong encouragement and support to put forward a candidate, and specifically in the person of Minister Johnson Smith”.

He told legislators that her ministerial achievements in international affairs are well known within and beyond the Commonwealth and that he was confident in Johnson Smith’s ability to play that leadership role and as such considered it important to engage in a process of consultation, starting with colleagues in CARICOM.

Holness said that the consultations are aimed at seeking a better understanding of their thinking about the leadership of the organization, as well as their views on Johnson Smith’s possible candidature.

He said that with “very limited exception” the responses of the heads of government and heads of state “as well as foreign ministers with whom we engaged across the region have been extremely encouraging” and that several have voluntarily committed to seek support for the candidature of Johnson Smith from their regional colleagues.

“On the strength of that feedback, and more importantly, my personal knowledge of the minister’s unwavering commitment to public service in the interest of global development, we took a sovereign decision to put forward a candidate that has demonstrated the skill, energy and competence to bring unity, accountability and focus to the leadership of the secretariat and the wider Commonwealth family,” Holness stated.

Prime Minister Holness told Parliament that while his regional colleagues will meet on Wednesday to discuss the issue, they are also aware that there has never been a unanimous position of support for Baroness Scotland and that some member states had previously raised the question of whether an alternative Caribbean candidate should be identified.

“It is never Jamaica’s intention to seek to divide our CARICOM family,” Holness said, adding that the established processes for dialogue and communication will be the only channels that Jamaica will employ in these matters.