KINGSTON, Jamaica – The main opposition People’s National Party (PNP) says it will use the three-day visit of the British Royal couple, to raise several issues including Jamaica becoming a republic as well as support for the Reparations Movement. 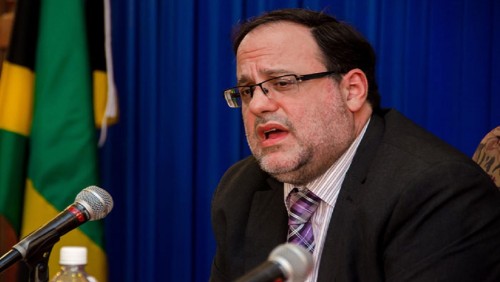 Opposition Leader Mark GoldingThe Duke and Duchess of Cornwall are due to arrive here Duke’s grandmother, Queen Elizabeth II, as she marks the 70th anniversary of her reign that has made her the United Kingdom’s longest-serving monarch. The visit is also intended to strengthen the UKs ties with Commonwealth countries.

“It is in the interests of the Jamaican people that the Opposition be present and able to make our views on these fundamental issues known to the Royals,” said Opposition Leader Mark Golding.

“Constructive dialogue is the best way to move this process forward, and attending these events provides an opportunity for this.

“The issues at hand are not about current personalities, but rather about the imperative of a principled reckoning with the past, and I intend to communicate directly our position on these issues,” he added.

In a statement, the PNP said it has “repeatedly” been calling on the Andrew Holness government to “commence and diligently pursue, with bipartisan support, the constitutional process for Jamaica to become a republic by replacing the British monarch with a Jamaican as our Head of State”

Last December, Prime Minister Holness promised that the issue of the country’s future constitutional status will be addressed shortly even as he warned that “there must not be empty symbolism” moving forward.

Former prime minister, PJ Patterson, has said the removal of the Queen as the head of state cannot wait on a full review of the constitution.

Patterson, 86, who served as the island’s prime minister from 1992 to 2006, has written to Prime Minister Holness and Golding urging them to swiftly begin the process for removal of the queen as Jamaica prepares to celebrate its 60th year of independence.

But Holness has aid the fact that as Jamaica approaches its 60th year of independence, there has been a lot of discussion on the issue, promising that the questions raised would be addressed shortly.

However, Prime Minister Holness said he would like to see Jamaica accomplish certain things before taking the step to replace the Queen.

The PNP said that it has been supportive of the Reparations Movement in the struggle for reparatory justice in respect of the genocide of indigenous peoples and the horrific injustices inflicted on peoples of African descent during the centuries of the slave trade, chattel slavery and the plantation system in Jamaica and other countries.

“The Opposition is also aware of planned protests during the visit, and of calls for the British monarch to make an authentic and profound apology for the role played by their family in the Slave Trade, chattel slavery and the plantation system, and also for a public acknowledgement that they benefited from it.