KINGSTON, Jamaica –Less than a week after Prime Minister Andrew Holness announced plans for a new Firearms Bill to be brought before the Parliament, National Security Minister Dr. Horace Chang said the measure will be tabled during this month. 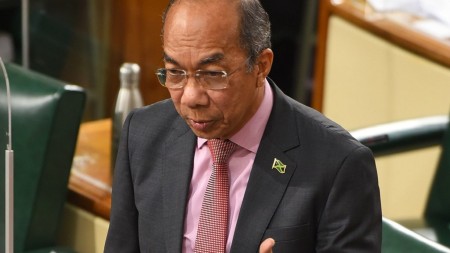 Dr. Horace Chang (File Photo)“We have gotten to the point where we are confident that we got the correct legislation and during the course of January, we should bring it to the House, “ Chang told reporters during a visit to the Carawina district in Petersfield, Westmoreland, the westernmost parish in Jamaica on Thursday.

Chang said that the new legislation will send a strong signal to criminals that the country will not be tolerating illegal firearms.

“There will be no room in the legislation for any form of discretion. So, we are actively moving on the legislation,” he said, echoing a similar sentiment by Prime Minister Holness during his New Year’s message that the Bill will outline the harshest consequences for the possession of illegal guns.

“Possessing an illegal weapon increases the means and likelihood of the possessor escalating to committing murder or other serious crimes. All Jamaicans should speak with one voice against the illegal possession of firearms,” Holness said.

He told the nation that an estimated 85 percent of all homicides in Jamaica are committed using an illegal firearm, meaning a gun that was brought into the country illegally, never registered in the national firearm database, and the owner was never put through a process to determine whether they are fit and proper to possess a firearm.

Figures released by the Jamaica Constabulary Force (JCF) earlier this week, showed 1,463 murders had been committed here last year, 132 or almost 10 percent above the murder total for 2020.

According to the JCF figures, all other major crimes decreased last year, with shootings being almost two percent below 2020.

Jamaica is one of the countries with the highest homicide rates in Latin America and the Caribbean.

Chang told reporters that other significant pieces of legislation are currently being examined closely, such as the Bail Act, adding that the police require a better legislative framework to properly deal with criminal activities.

He said in addition to the legislation, other crime-fighting tools are also required, as it will take a multifaceted approach to stem crime.

“We need to have a highly trained and adequate number of police officers, relevant legislation, resources and the provision of an environment that can work.

“At this point, we have some very good leadership in the force from the Commissioner of Police. They are applying their training and minds well.  They make adjustments as they are doing here in Westmoreland and I am confident that we will be seeing an impact throughout the course of this year,” Chang added.