KINGSTON, Jamaica – The Jamaica government says it will cost more than J$100 billion (One Jamaica dollar=US$0.008 cents) to restructure the system of public-sector compensation over the next three years. 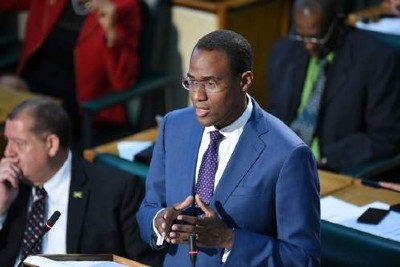 Dr. Nigel ClarkeFinance and the Public Service Minister, Dr. Nigel Clarke said that approximately J$17 billion would go towards certain categories of allowances “that up until the current fiscal year, have been classified in programs and not wages”.

Delivering the J$912-billion dollar budget late Tuesday, Clarke said the restructuring exercise is intended to overhaul the system of salaries and other emoluments in the public service to make it more equitable.

He said that while implementation is slated to commence on April 1, this year, “that does not mean that your April paycheck will reflect the [new] restructured compensation system.

“First, we want to have the opportunity to continue our engagement with public-sector unions and bargaining groups, provide more information and fine-tune the system. We then propose that early in the second quarter of the new fiscal year (2022/23), the implementation will begin, but it will be effective retroactive to April 1, 2022,” he told legislators as he delivered the budget under the theme “‘Recovery, Reform and Restoration”/

Clarke said that every public-sector employee “will know (beforehand) what your salary will be this year, what it will be next year, and what it will be in the third year when we have completed the implementation”.

The Finance Minister noted that the new system will be characterized by simplicity, improved pensions and greater efficiency and transparency “for the individual and for the country and, ultimately, will be a contributing factor to better quality service”.

He told legislators that no public-sector employee’s net pay will be lower consequent on the new compensation system, but rather higher.

“We are abandoning the existing cumbersome, complex, unworkable, and unsustainable compensation system and implementing a new [one] that incorporates the principles [of transparency and clarity],” he said, noting that once compensation restructuring commences, “Jamaicans will also expect more from the public sector, and rightly so.