KINGSTON, Jamaica – Cabinet has approved the setting up of a Constitutional Reform Committee, which will play a key role in ensuring Jamaica’s smooth transition to a republic, Minister of Legal and Constitutional Affairs Marlene Malahoo Forte has disclosed. 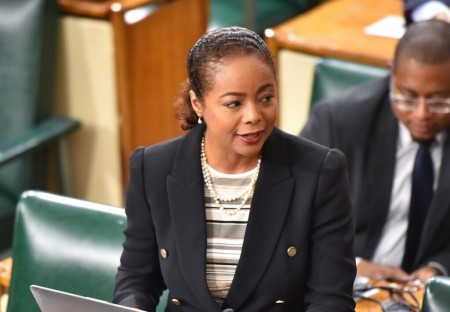 Minister of Legal and Constitutional Affairs Marlene Malahoo Forte (Courtesy of JIS)She said the body “will be a consultative committee, a collaborative committee where we exchange perspectives”.

It will comprise representatives from the Government and Opposition, the Attorney General, constitutional law experts, including persons from academia, and the private sector.

Minister Malahoo Forte told the House of Representatives on Tuesday that much of the groundwork required to move away from the monarchy has been done through previous constitutional reviews, and the Committee “will provide some advice on the remaining work to be done and how the steps should be sequenced to implement those recommendations”.

“The starting point will see focus on matters on which there is consensus, starting with those that are deeply entrenched,” she noted.

The Legal and Constitutional Affairs Minister said the background documents have been prepared, which will inform the work of the Committee.

Minister Malahoo Forte said the Committee will review the Constitution of Jamaica against the backdrop of the work done and advise of the steps required to be taken to implement the recommendations that were approved and on which consensus remains.

The Committee is also expected to examine the provisions of the Order in Council, the Constitution of Jamaica and the Jamaica Independence Act, identify provisions that will require amendment, if any, and give effect to the reform recommendations.

It will also advise and make recommendations on the shift from a constitutional monarchy to a republic, including the type of republic, and the necessary powers to address Jamaica’s governance challenges.

“A review of Chapter three [of the constitution] will have to be done. This has some urgency around it, but we will put in that work in the Committee,” Malahoo Forte said.

The Minister said it is expected that the Committee will be announced next month.