Washington, DC - Republican Congressman from the 7th District in the State of Tennessee, Dr. Mark Green, Ranking Member of the Subcommittee on the Western Hemisphere, Civilian Security, Migration and International Economic Policy, has the rapped attention of Jamaica’s Ambassador to the United States, Her Excellency Audrey Marks, as they held discussions during a courtesy call on him at his Office at the Rayburn House Office building on Capitol Hill on Tuesday May 17th. 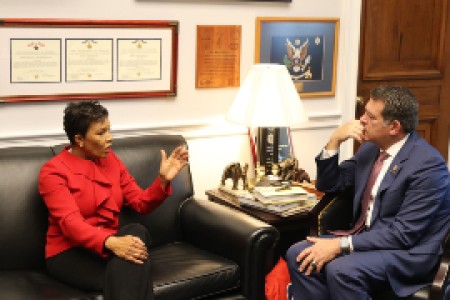 Photo by Derrick ScottThey held discussions on a wide range of topics including increased investment between Jamaica and the State of Tennessee and Jamaica’s support for his “Western Hemisphere Nearshoring Act” which seeks to shift manufacturing from China to Latin America and the Caribbean.

The Act seeks to incentivize producers to relocate to Latin America and the Caribbean, and is designed to contain China's influence, while creating economic opportunity, and addressing the root causes that drive migration to the U.S.