KINGSTON, Jamaica – Jamaican communities will benefit from enhanced access to justice thanks to a new project funded by the Government of Canada and implemented by the United Nations Development Program (UNDP), in partnership with the Ministry of Justice. Today, Canada's Minister of International Development, the Honorable Harjit Sajjan, announced the launch of the Social Justice (So-JUST) project, "Today, we continue our strong partnerships with the Government of Jamaica and the UNDP by launching this new initiative to further justice reform in Jamaica. Ultimately, we look forward to a future in which all Jamaican citizens have increased trust and confidence in the justice system." said Minister Sajjan. 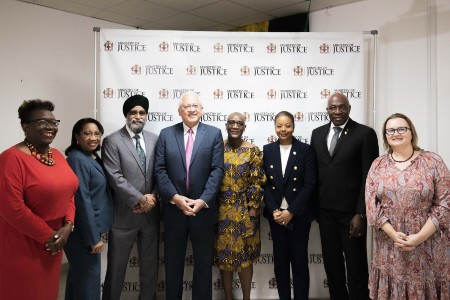 The seven-year initiative, which runs from 2021 to 2028, aims to facilitate a more rights-based and gender-sensitive justice system that yields equitable outcomes for all Jamaicans.

It comes in the wake of the recently concluded Justice Undertakings for Social Transformation (JUST) program, which ran from 2011 to 2021.

So-JUST is intended to integrate the four pillars of social justice – equity, access, participation, and rights.

It will focus specifically on enhancing the rights of and access to justice for women, girls, people with disabilities, and residents of rural and vulnerable communities.

The project is designed to directly benefit the poorest and most disadvantaged users of justice services, in particular survivors of gender-based violence.

Justice Minister, Delroy Chuck and High Commissioner of Canada to Jamaica,  Emina Tudakovic, were among the speakers at the project’s recent launch.

In his remarks,  Chuck thanked the Canadian Government for supporting the project, emphasizing that, “Jamaica must respond by becoming a peaceful, safe and secure society”.

“So, this program has now been launched. It’s really one where we expect strong communication, so that every single citizen is made aware that you will have help [and] you can get help.”

The Justice minister  urged persons to “use the services being provided by the Ministry of Justice and other State agencies… and in doing so, we, hopefully, can create a kinder and gentler society; we certainly can reduce, deter, and prevent many violent confrontations”.

High Commissioner Tudakovic, in her remarks, said Canada is “honored to be associated with the justice reform process in the Caribbean”, and assured that the country “remains committed to supporting stakeholders as they seek a more equitable, efficient and responsive justice system for all”.

For his part, Canada’s Minister of International Development,  Harjit Sajjan, outlined that, for many years, his country has been a primary international development partner of the Government of Jamaica.

“This directly improves justice outcomes by reducing the backlog in the courts. For women and girls in rural areas, the extension of access to legal-aid systems has a direct impact,”  Sajjan said.

The So-JUST Project is being implemented by the United Nations Development Program (UNDP), in partnership with the Justice Ministry and the Office of the Chief Justice, with funding from Global Affairs Canada.

Key target beneficiaries include the departments and agencies of the Justice Ministry, the courts, and the Office of the Director of Public Prosecutions.

The project is aligned with Vision 2030 Jamaica’s target of creating a safe, cohesive, and just society, as well as UN Sustainable Development Goal # 16, which speaks to promoting a peaceful, just, and inclusive society.

This is in addition to UNDP’s strategic plan for 2022 to 2025, to build resilience through structural transformation.