KINGSTON, Jamaica – Jamaica has launched its campaign for the position of Commonwealth Secretary General even as the Caribbean Community (CARICOM) grouping has given no date as to when a regional sub-committee will meet with the two Caribbean candidates for the post. 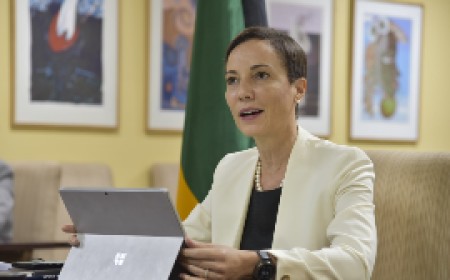 “I welcome this opportunity to launch and to lobby for our candidature in London as it is the seat of the Commonwealth. I have been provided with the opportunity to engage with members of the Board of Governors, to listen to their views and interests and to solicit support from stakeholders,” Johnson Smith said.

“It has been a true privilege to share my vision and my pledge, if appointed, to lead the Secretariat in re-energizing the delivery of meaningful support to all our Commonwealth member states. I was pleased to share my profile and candidature statement with the membership in bilateral meetings in the days prior, and will continue to do so,” she said.

CARICOM leaders remain divided in their support for the two candidates for the position of Commonwealth Secretary General agreeing instead to appoint a sub-committee to delve further into the matter.

A three paragraph statement issued following their deliberations on April 6 indicated that the CARICOM leaders were still divided on whether to support the incumbent, Baroness Patricia Scotland, who has been nominated by Dominica, or Johnson-Smith, Jamaica’s nominee.

The Dominica-born Scotland is the second Secretary-General from the Caribbean and the first woman to hold the post.

The CARICOM leaders said they have noted that “two member states of the Community had nominated two eminently qualified candidates for the post of Secretary-General of the Commonwealth and agreed that a Sub-Committee of Heads of Government comprising of The Bahamas, Belize, Dominica, Guyana, St Vincent and the Grenadines and Jamaica will meet with the two candidates”.

The leaders did not indicate when and where the meeting with the candidates will take place.

Jamaica’s Prime Minister Andrew Holness has defended the decision of his government to nominate Johnson Smith, saying that towards the latter part of the initial term of the current secretary-general, several countries, including Jamaica, were approached regarding the possibility of nominating a candidate for the post.

Minister without portfolio in the Office of the Prime Minister, Robert Morgan, said there is no chance that Jamaica will withdraw its nominee for the position.

“Jamaica is a sovereign democracy. What that means is that Jamaica has a right, a responsibility towards its citizens and itself to push forward an approach that is in the interest of Jamaica. That interest also takes into consideration the regional associations and international associations we’re a part of,” Morgan said recently, adding “I don’t think there’s any evidence of a division in CARICOM”.

But Antigua and Barbuda’s Prime Minister Gaston Browne, who has described the Jamaica position as a “monumental error” warned “those who seek to divide and rule, are encouraging Jamaica to present a candidate in opposition to the current Secretary General, who is serving on a CARICOM rotation”.

Dominica’s Prime Minister Roosevelt Skerrit in a March 23 letter to all Commonwealth leaders, urged the re-election of Scotland writing that she had a mandate “to reform the Commonwealth Secretariat and to advocate and to be a voice for those of our countries without a voice.

“In her first term she delivered on reform and on change; she delivered on partnerships and innovation for the benefit of our countries; she delivered on good offices and democracy. She successfully braved the challenges of the climate crisis and of the COVID-19 pandemic and has laid a solid foundation to look at solutions for our countries in the future,” Skerrit said in his letter, a copy of which has been obtained by the Caribbean Media Corporation (CMC).

On Thursday, Johnson Smith said that “to date, we have made outreach to member states at the highest level, to colleagues in capitals in which Jamaica maintains diplomatic missions, as well as directly with the capitals of Commonwealth countries.

“Lobbying efforts are being supported by a dedicated website and of course, social media. In the conduct of these activities, I have had the full support of my Ministry and of the Office of the Prime Minister,” said Johnson Smith , who has since travelled to the United States to participate in the UN Economic and Social Council (ECOSOC) Forum on Financing for Development Follow-up.

The official government statement said that she will “also use the opportunity to lobby for the candidature.

“As a national and representative of a small state, I am truly inspired by the unique relationship that characterizes our Commonwealth. The Commonwealth Charter provides a strong framework for promoting peace and prosperity, as well as modalities for co-operation among our member states, fostering friendship, fraternal dialogue and mutual respect.”