KINGSTON, Jamaica – Prime Minister Andrew Holness says the Government is bolstering its capacity to control the country’s territorial waters in order to curtail the entry of illegal firearms. 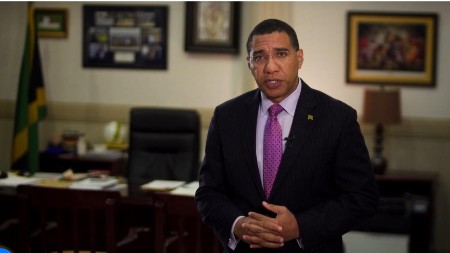 Prime Minister Andrew Holness (UNDRR Photo)Addressing a National Day of Prayer event on Wednesday, he outlined measures being taken to address the crime scourge, as he decried the recent spate of murders in the country.

In addition to securing the borders, Holness said the new Firearms Bill, which will be brought to the Houses of Parliament, will provide stronger penalties for the possession of illicit weapons.

“I am expecting the full support of the Parliament in passing legislation to show that Jamaica, in our 60th year, will remove from our society, illegal guns and other weapons,” he said, assuring holders of legal firearms that they have no need to worry about the legislation.

“I want to make it absolutely clear; Jamaica does not have a significant crime problem with legal firearms…What we have a problem with is that for decades, guns have been allowed to come into our country through our various illegal ports of entry dotted right across the island.

“It has accumulated now to a point where everybody has a gun… and they are used indiscriminately and I want us to dismiss this thought…that you can possess an illegal firearm to protect yourself,” he added.

Regarding the States of Public Emergency (SOE), the Prime Minister said that they have been effective, but noted that there are constitutional issues surrounding the use of the security measures, which the Government must move speedily to resolve.

“It is not a tool that the Government can use by itself; it requires a super majority in Parliament to use it. But the Government is always willing to use it because we have devised a mechanism that ensures that the rights and the lives of Jamaicans are protected,” Holness said.