PARAMAIRBO, Suriname – The French-based International Police Organization (Interpol) has rejected a request from the Surinamese judicial authorities to place the fugitive ex-minister of finance, Gillmore Hoefdraad, on its international wanted list. 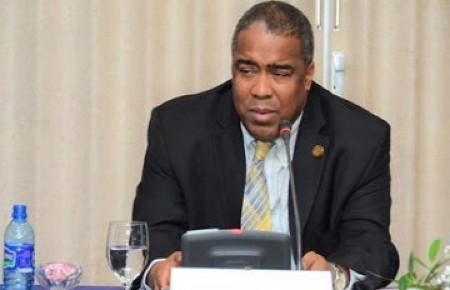 Former finance minister, Gillmore Hoefdraad. (File Photo)Local authorities were formally notified by Interpol headquarters in Lyon last week that the law enforcement agency will in no way cooperate in what has been termed the “political prosecution of an ex-minister”.

Justice and Police Minister Kenneth Amoksi confirmed the Interpol response and in response to Interpol’s decision, the Public Prosecution Service of Suriname in a statement said that the decision has no influence whatsoever on the criminal case against the ex-minister.

“After the formalities have been complied with for this purpose, a message was received from Interpol on 8 July 2021, stating that the Red Notice will be published. This publication related to that part of the network which is only accessible to Interpol authorities.

“For publication on the public website, as requested by Suriname, the application was referred to the “Notices and Diffusions Task Force” of the organization in accordance with Interpol procedures. Additional information has been requested several times by the said department, to which Suriname has always responded promptly and comprehensively. Interpol has now decided, based on its internal assessments, that the data relating to the person of Gillmore Hoefdraad will be removed.

“The Prosecutor’s Office will study this decision in more detail and determine whether and how it will respond to this towards the organization,” the statement added.

Interpol recently addressed the arrest warrant against Hoefdraad during its 120th session, which took place from April 11-15. After the review of the Hoefdraad case, the French-based organization determined that Suriname has grossly violated the rules and that the rights of the ex-minister have been trampled.

On April 14, INTERPOL issued a detailed 11-page decision confirming that Suriname’s prosecution of Hoefdraad is politically motivated and in violation of the constitution.

The ex-minister is characterized as a victim of political persecution and that his human rights have been grossly violated by the Surinamese government, says the team of lawyers assisting Hoefdraad. According to the lawyers, Interpol’s decision confirms that Suriname has no evidence of self-enrichment, yet went ahead with the embezzlement charge.

The decision that has been forwarded to all INTERPOL departments, indicates that no international police cooperation should take place through the channels of Interpol.

Hoefdraad was sentenced in absentia by the Surinamese Court of Justice to 12 years in prison for violation of the Anti-Corruption Act and the Banking Act. He had been accused of having cooperated in the sale of real estate that placed the Central Bank of Suriname at a disadvantage.

The ex-minister has appealed against this conviction and his lawyer, Murwin Dubois, said the Interpol decision means that Hoefdraad, who had gone into hiding since July 2020, is now able to move freely anywhere internationally.

The ex-Minister of Finance is currently on the ‘most wanted list’ of the Surinamese police.

“The fact that he has been placed on Suriname’s most-wanted list also only raises questions, but the case is still pending,” said the lawyer, adding that he intends to contact his client soon to discuss the criminal case that is still pending in the courts here.

The Public Prosecution Service of Suriname has indicated that it will be pursuing other options to apprehend the former finance minister including the use of treaties reached with other countries.